You didn't fancy it then?
Fancy what?
Getting in the taxi.
No. 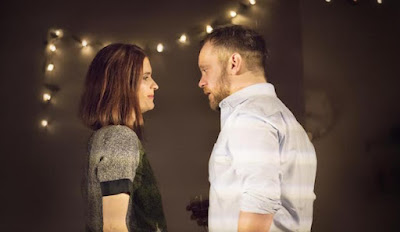 Last Saturday night Stuart, me, and a bunch of us went to see Dave Eldridge's new play The Beginning at the National Theatre's Dorfman Theatre on London's glitzy South Bank.

Full disclosure: Dave is a mate of ours.
Fuller disclosure: The Beginning is simply brilliant!

Taking place in a Crouch End flat in the wee small houses at the end of house party Essex boy Danny (Sam Troughton) has stayed behind. He's pissed. Laura (Justine Mitchell) is pissed too. It's her party after all and she is making the moves on Danny. Only all is not what it seems. Why doesn't Danny just "get in amongst it"? Why is Laura so forward? Living in a bustling big city like London can be a lonely experience and once you've been round the block a few times you don't want to be get hurt again.

Far from being a straightforward will they / won't they two-hander about sexual conquest the play quickly develops into a frank and frankly hilarious discussion about sex, life in your late 30s, the loneliness of the dating game and Ginsters scotch eggs.

Eldridge's masterful writing makes us both laugh and cry as his two characters try desperately to seek common ground.

And the joke about Paloma Faith and the dancing scene are worth the entrance ticket alone.