Our first full day in Mexico City was a bit of a whistlestop tour.
Pyramids
After an earlier Mexican breakfast our guide picked us up at our hotel to take us to the ancient Toltec city of Teotihuacan, where we visited (and climbed!) both the Pyramids of the Sun and the Moon, and walked the Calle de los Muertos (Road of Death). Yes, my friends, we were in human sacrifice territory.
Constructed from two centuries BC Teotihuacan quickly became the largest and most populous urban centre in the New World and the massive pyramids were their defining feature. Each addition platform stage of the pyramids were built every 52 years at the time of each eclipse creating an extra platform upon the last. There are no tombs or graves inside, just monuments to the moon and the sun. And a place to offer up human sacrifice.

The city seems to have functioned for centuries until its rather sudden collapse, possibly in the 7th century. The place was called Teotihuacan, by Nahuatl speakers, several centuries after the city's fall, but its original name, the language or languages spoken there, and the ethnic groups who built the city are still a mystery. There is prominent sign on display to reassure the idiots - "this place was built by man, not aliens." Ha, ha.

The pyramids of the sun and moon here are said to rival those of Giza in Egypt, and at the city's peak of power, between AD 350-650, it had many influences over other now ancient sites throughout Mexico and Guatemala, especially in relation to the pottery, sculpture and architecture.

The pyramids were certainly amazing and worth the trip to Mexico alone. 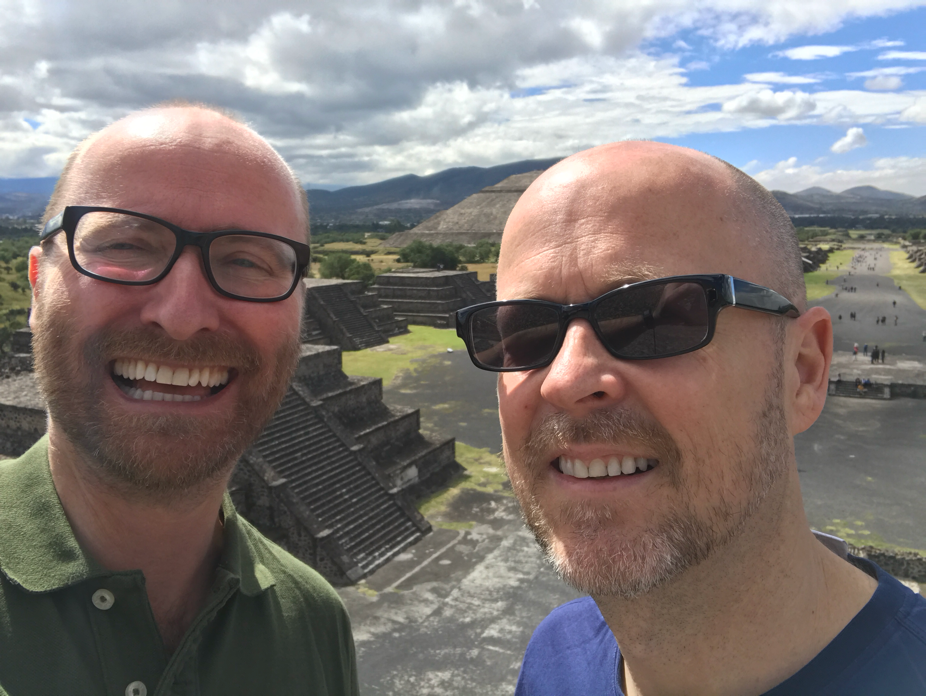 There are a lot of cars in Mexico City. And that is possibly the biggest understatement of the year. Traffic jams, pollution and crazy driving is a way of life here it seems. A car journey might take 30 minutes or 300 minutes - you have no idea until you hit the road. We spent many an hour sitting in traffic with our tour guide looking at other cars.

They have tried various schemes here to control the congestion; free bike hire, car-free days, only allowing cars whose number plates end in certain numbers etc. but nothing seems to work.

As the greater Mexico City population is 21 million people and with such high car ownership I can't see it being solved any time soon.

Still, with all the extra time in the car our guide got to tell us about a darker side on Mexico City life... Police, local officials, government officials, traffic cops, state politicians... You name it, we heard dozens of hair-raising stories of either bribery, fraud, corruption, intimidation, threats or death. Kick-backs, back-handers, brides, suitcases of cash, the stories we heard varied from simply turning a blind eye to having someone (or their family) killed if they didn't comply.

There is a lot of street crime in Mexico City. When an area is described as 'safe' that word has a lot of positive connotations to it. People live in such and such area because it is 'safe'. They walk along that street because it is 'safe'. You only eat in 'safe' areas. In ‘unsafe’ areas like the lawless shanty areas cars get stripped to their chassis if left unattended. Knife crime and gun crime is rife. But for me hearing of the widespread corruption was the most alarming. Street crime can be addressed. Corruption destroys a country from within. And it seems everyone is at it.

So sad to hear.

Posted by overyourhead at Saturday, October 14, 2017