Against @AlmeidaTheatre Meandering and uneven... 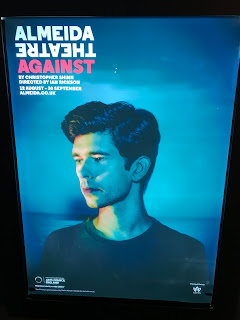 The other Friday night Stuart and I went to see Christopher Shinn's Against at the Almeida Theatre in London's glitzy Islington.

Starring the wonderful Ben Whishaw as Luke - a tech billionaire and a man who now hears the word of God - the play was pretty underwhelming to be honest. Great performances from the excellent cast on stage but the central conceit of a man singly charged with curing violence in a violent world seemed a bit of stretch. If the story had the power of its convictions it would have perhaps had stronger religious themes - twelve modern disciples, a doubting Thomas, a traitor, a death... But the uneven tone, the meandering plot, the three hour running time, and the lack of any resolution seemed more like a play that was underwritten or badly edited than one making a point about there being no cure to violence.

Quite a few people left at the interval too (something I really don’t agree with BTW.)
Posted by overyourhead at Tuesday, October 10, 2017