Rosencrantz and Guildenstern Are Dead...

Last night Stuart and I went to see Tom Stoppard's absurdist, existentialist tragicomedy Rosencrantz and Guildenstern Are Dead at The Old Vic in London's glitzy Waterloo. 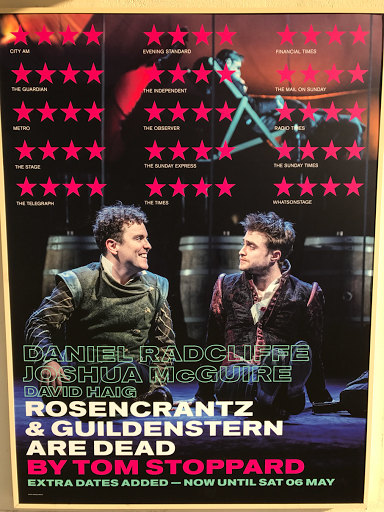 Against the backdrop of Shakespeare’s Hamlet, this mind-bending situation comedy sees two hapless minor characters, Rosencrantz (Daniel Radcliffe) and Guildenstern (Joshua McGuire), take centre stage with David Haig as The Player. Increasingly out of their depth, the young double act stumble their way in and out of the action of this iconic drama. In a literary hall of mirrors, Stoppard’s brilliantly funny, existential labyrinth sees us witness the ultimate identity crisis.

Both Daniel Radcliffe and Joshua McGuire are excellent; the first two acts producing some full-on belly laughs – none more so that when they play Questions. The production perhaps loses its way a little in the final third act though as the events of Hamlet play a more prominent part of the action.

The play is delightfully absurd and as the characters constantly ask themselves what is going on - we the audience know only too well – they demonstrate theie conflict between art and reality.

Metatheatre is a central structural element of Rosencrantz and Guildenstern Are Dead. Scenes that are staged as plays, dumb shows, or commentaries on dramatic theory and practice, are prominent in both Stoppard's play and Shakespeare's original tragedy Hamlet. In Hamlet, metatheatrical elements include the Player's speech, Hamlet's advice to the Players, and the meta-play "The Mousetrap". Since Rosencrantz and Guildenstern are characters from Hamlet itself, Stoppard's entire play can be considered a piece of metatheatre.

Luckily all this self-referentialism is not only clever but funny. Very, very funny.

Recommended: If you like Hamlet. And Stoppard. And metatheatre!
Posted by overyourhead at Friday, April 07, 2017