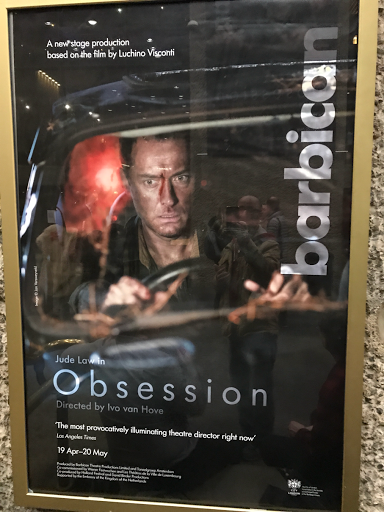 Last night Stuart and I went to see Obsession at the Barbican Theatre in London's glitzy Barbican Centre.

Well, not exactly utter rubbish but mainly rubbish. Even WunderKind Ivo van Hove's quirky production couldn't salvage the dreadful translation of the script by Simon Stephens. Lame, boring and trite the actors try their best with lines like, "Is that what you are thinking? Is it? Because if it is, I don't know what to think myself."

Based on The Postman Always Rings Twice (unhappy couple, enter drifter, steamy affair, stylised murder, and tortured guilt) this should have been a sexy affair. Jude Law gets his top off (buff!) and there is oil, lots and lots of oil to wallow in. But the chemistry between the leads rarely catches fire and you find yourself being more interested in the minor characters like the priest with his interest in yellow eels or the gay drifter Johnny with his longing for adventure and the sea.

There was lots of sighing and yawning in the auditorium and a few people left mid-performance. All a bit of a waste of what is undoubtedly good talent.

Oh and did I mention that the characters burst into opera for no apparent reason. And they run away by running on the spot on an asthmatic travellator. All it needed was a tandem or a dog on roller-skates.