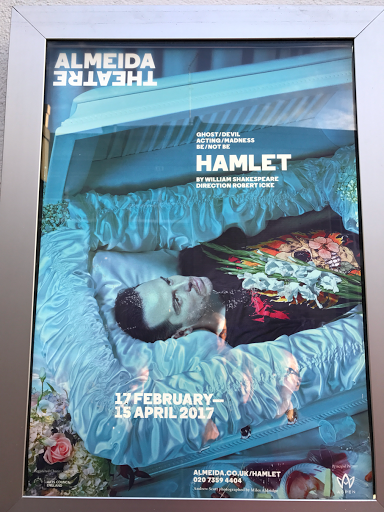 Last Saturday night Stuart and I went to see Andrew Scott take on the Bard's mightiest role as he played Hamlet at the Almeida Theatre in London's glitzy Islington.

Synopsis: So "Hamlet" then Moriarty... 221B or not 221B? He did not disappoint. Wonderful. Long but wonderful.

David Tennant has had a go. Benedict Cumberbatch has taken a stab at it. And now fellow star of BBC Steven Moffat dramas Andrew Scott – Moriarty in Sherlock – is giving us his apparently compulsory Hamlet. When will it be Martin Freeman's turn, I wonder? Or Billie Piper's? Actually, there's a thought!

But be reassured dear reader, Mr Scott's sweet prince was top notch. His was a moving and human Hamlet, full of charm, self-mockery, and ability to speak directly to the audience. He found new paths through Hamlet's soliloquies, dwelling on certain words as if caressing their edges. Cleverly each seemed like an act of intimacy with the audience.

As we've come to expect from director Robert Icke the production is clever too. Bob Dylan songs regularly float across the auditorium, the ghost of Hamlet's father is first seen on CCTV, and Polonius wears a wire.

It's transferring to the West End soon so if fancy 4 hours of good quality Shakespeare - this is the show for you.

In the foyer we spotted Benedict Cumberbatch with Sophie Hunter. He was obviously there to support his friend - and check out if he had done any better than his own fairly lacklustre production at the Barbican a couple of years back. And when Mr Scott uttered the immortal line "Alas, poor Yorick! I knew him.." I'm sure we heard Cumberbatch mutter under his breath "I knew him better!"