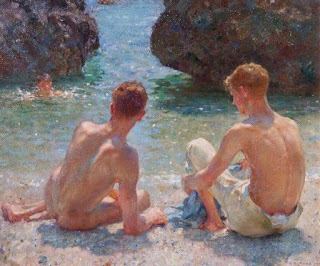 Two pieces of legislation set the timespan for this exhibition. One is the abolition of the death penalty for sodomy in 1861; the other is the partial decriminalisation of homosexuality in 1967. And it’s the shadow of illegality and widespread prejudice that’s cast over everything on display in this rich and fascinating survey of queer art.

Weaving between history and gossip, private lives and public declarations, repression and celebration, the exhibition recounts a complicated story of sexuality and desire through work that is as often as coded and veiled as it is candid and outspoken.

Although wide-ranging, I'd like to highlight three pieces from the exhibition that spoke to me.

The first is the calling card left by the Marquess of Queensberry for Oscar Wilde (with the words “for Oscar Wilde, posing Somdomite” [sic]) left at Wilde’s club. The card hangs near a full-length portrait of Wilde, as an elegant man about town and the door to his cell in Reading jail.

The second is Duncan Grant’s 1930 portrait of PC Harry Daley which commemorates the Hammersmith policeman who was, for a time, EM Forster’s lover, and who went on to write a book recounting his experiences on both sides of the law.

Thirdly the heart-breaking pieces by precocious Jewish pre-Raphaelite painter Simeon Solomon who was arrested for cottaging, first in London, later in Paris, and spent the last 20 years of his life in St Giles workhouse, alcoholic and abandoned by many of his friends.