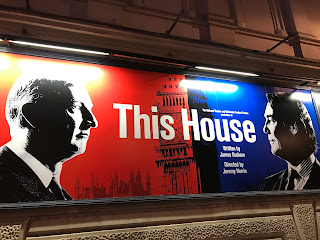 Last Friday Stuart and I went to see This House at the Garrick Theatre in London's glitzy West End.

The play derives its title from the name given to the House of Commons by MPs. The action takes place in the period in British parliamentary history between the February 1974 general election and the 1979 vote of no confidence in the government of James Callaghan. The play is set in the Palace of Westminster mainly in the offices of the Labour and Tory Chief Whips. Party leaders such as Ted Heath, Harold Wilson, James Callaghan, Jeremy Thorpe and Margaret Thatcher remain offstage characters. The narrative concentrates on the relationships between the two sets of whips (the so-called usual channels), and between the whips, their backbenchers and the members of the minor parties.

It's a sort of Yes Minister on steroids. Like House of Cards but with extra Jokers.