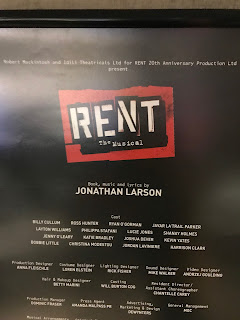 Last night Stuart and I went to see the opening night of New York set musical Rent at the St James Theatre in London's (soon to be) glitzy (when is it going to be finished) Victoria.

Now, we've seen some pretty rubbish things over the years at the St James Theatre (yes, we're looking at you McQueen). And although Stuart is (or was) a big fan of Rent as a piece of work recent listening to the Original Broadway Cast recordings had rather put him off. I'd never seen the show myself but to be honest when I too listened to the cast recordings I wasn't filled with much hope either. Self-absorbed losers wringing their hands, singing about killing a dog and a cow jumping over the moon? No, thanks.

But how wrong we both were. Our low expectations proved totally unfounded. The admittedly rather dated story of poverty, angst and HIV set in New York City in the 1990 proved to be highly entertaining. It was funny, heart-felt and sexy.

And it was all down to the wonderful cast.

Sure, the setting was fairly standard NYC fayre - the sort of place you might find on Sesame Street with burning braziers, graffiti, discarded supermarket trollies and wrought-iron fire escapes. Sure, the on-set band played excellently. And sure, the sound and lighting were as good as you would expect to see in any West End show.

But it was the cast that made the story come alive. Even the weaker songs were sung with gusto. Bruce Gutherie direction was spot on too with Lee Proud's Hot Gossipy dancing making full use of Anna Fleischle vertical set.

Ryan O'Gorman played Tom Collins as a sexy beefcake wearing what are probably the tightest pair of jeans I've even seen on stage. It wasn't just my eyes that were bulging. Hubba hubba.

Even Lucie Jones as fly-by-night lesbian singer Maureen made the piss-poor song Over the Moon fun.

Other notable stand-out ensemble songs were the renditions of Rent, La Vie Bohème, and Seasons of Love.

Best song of the night: Tango Maureen as sung by Billy Cullum as jilted Mark and Shanay Holmes as soon to be jilted Joanne.

The absolutely stand out performance of the night though was Layton Williams as Angel. When he sang Today 4 U complete with high-heeled, drag queen back flips it brought the house down and the audience to its feet. Simply sensational.