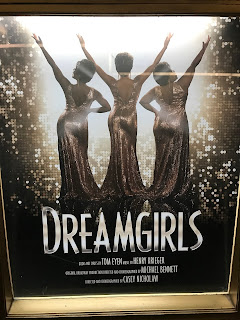 Last night Stuart, Darren, Mark and I went to see Dreamgirls at the Savoy Theatre in London's glitzy West End.

Synopsis: Great musical. Great production. Amber Riley packs a punch and is outstanding as the wronged Effie White. Just don't call it a show about The Supremes!

The original Broadway production of Dreamgirls in 1981 starred Jennifer Holliday as Effie White and Sheryl Lee Ralph as Deena. It ran for 5 barn-storming years.
The Oscar winning 2006 Dreamgirls film starring Jennifer Hudson as Effie and Beyoncé as Deena made a fortune at the box-office and came away dripping with awards.
For this its West End premiere the musical is being directed and choreographed by Olivier and Tony Award-winning Casey Nicholaw and stars Glee's Amber Riley as Effie White. Abd it's no exaggeration to claim it’s probably the West End's hottest ticket right now.
So expectations were pretty sky high as we took our seats.
But did it deliver? Could it live up to the hype? You betcha! Amber Riley was simply sensational. You couldn't take your eyes off her.

Dreamgirls is based upon the show business aspirations and successes of R&B acts such as The Supremes, The Shirelles, James Brown, Jackie Wilson, and others. Act 1 starts in 1960s. Full-figured lead singer Effie White and best friends, Deena Jones and Lorrell Robinson perform as The Dreamettes at the famous Apollo Theatre talent show. Effie's song writing brother C.C. writes their songs and they catch the eye of used car salesman Curtis Taylor who is determined to make these three black singers household names.
Curtis's first decision is to make Deena the lead singer and consign Effie to singing the oohs and aahs as a backing singer. Effie as the better singer is initially outraged but goes along with it for the time being. Later when they get billed for their first Las Vegas gig as "Deena Jones and the Dreams" Effie has had enough and stands up to them all. They sack her as she belts out the show-stopping "And I Am Telling You I'm Not Going". Wow, what a song!
In the original version Effie was meant to die at the end of the first act but thank goodness the producers changed their minds.

Act 2 starts in 1972 and Deena Jones and the Dreams have become the most successful girl group in the country. Effie's attempt at a solo comeback starting with "I Am Changing" and C.C.'s emotional ballad "One Night Only" initially fares well. However, Curtis steals "One Night Only", makes it into a disco stomper for Deena Jones and the Dreams and attempts to destroy Effie's comeback.
Effie and her lawyer confront Curtis backstage, Deena and Effie reconcile and Denna decides to break up the Dreams to pursue an acting career. At the Dreams' farewell concert, Effie re-joins the group on stage one last time.

It's all great fun. And judging but all the women sitting around us shouting out "Go get him, gurl!" and "You walk out on him, missy!" everyone else loved it as much as we did.

It really was Amber Riley's show though. Her Effie was sublime.

A special mention also needs to go to Adam J. Bernard's Jimmy Early who was fantastic.

My only minor quibble might be that perhaps that Liisi LaFontaine's Deena isn't strong enough for her role as might have been hoped.

And the similarities between The Supremes true life events and the plot of the musical? Purely coincidental, surely.

Both the Supremes and the Dreams started off with "ettes" in their group's name. The Supremes were originally the Primettes, the Dreams are shown as starting off as the Dreamettes.
In the beginning, Florence Ballard originally sang lead, just as Effie White does in the musical.
Both the Supremes and the Dreams did background vocals for established recording artists before becoming famous.
Diana Ross was chosen as the lead singer of the Supremes because of her distinctive, softer, commercial voice, just as Deena Jones is chosen as the lead singer of the Dreams.
The storyline of the love affair between Deena Jones and Curtis Taylor Jr. was modelled on Diana Ross and Berry Gordy Jr.'s love affair which eventually led to his emphasis on her career rather than that of the group.
The storyline of Lorrell Robinson and James "Thunder" Early's relationship resembles Mary Wilson's relationships with fellow Motown artists as well as Welsh singer Tom Jones.
Deena Jones is coached to be the spokesperson for the group during press conferences, just as Diana Ross was for the Supremes.
The press was instructed to refer to Diana Ross as "Miss Ross," just as the press is instructed to refer to Deena Jones as "Miss Jones."
As Diana Ross was pushed forward as the star of the Supremes, Florence Ballard became jealous and hostile when she was forced into the background. Effie White reacts in a similar manner when Deena Jones is pushed forward as the star of the Dreams.
Florence Ballard missed performances, recording sessions, allegedly "faked" illnesses, and gained weight, all of which resulted in her being fired from the group in Las Vegas in 1967. The character of Effie White goes through the same experience.
Cindy Birdsong went on to perform with the Supremes the same night Florence Ballard was fired, just as Michelle Morris goes on to perform with the Dreams the same night Effie White is fired.
The Supremes became "Diana Ross & the Supremes" in 1967 while in Las Vegas. The Dreams became "Deena Jones & the Dreams" in 1967 while in Las Vegas.
After Diana Ross left the Supremes in 1970 to pursue other projects such as film work, in 1972 she starred in her first motion picture, the Motown-produced Lady Sings the Blues. The character of Deena Jones leaves the Dreams in 1972 to pursue a career as an actress.

So no similarities then!

Posted by overyourhead at Friday, December 02, 2016