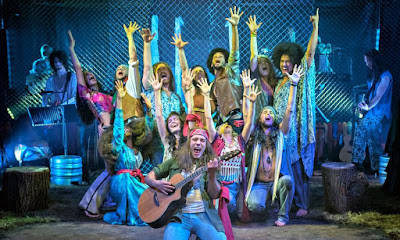 Last Saturday afternoon Stuart and I travelled all the way up to Manchester to see a production of our favourite musical Hair at the Hope Mill Theatre in decidedly unglitzy Manchester Piccadilly.

Synopsis: Great musical in a small theatre. Dazzling performances Let the Sunshine In.

I was too young to go to the London opening of Hair the first time around but I'm certainly not too old for it now.

It is one of Stuart and my favourite musicals which, for all the show’s structural failings – including an almost complete lack of narrative impetus and coherence – it is sweetly enticing, whatever your age, in this revival by Jonathan O’Boyle. The show benefits enormously from the intimacy of Manchester’s most vibrant new theatre space, which makes the audience feel as if we really are part of this tribe. It’s hard to resist joining in the dancing at the end – although we resisted flinging our clothes off, too.

The piece, which focuses on a group of New York hippies and Vietnam protesters who believe in making love not war, is as daft as a brush. It follows Claude, who can’t decide whether to burn his draft card or just his New York library card and accept his call-up. You can only assume that Gerome Ragni and James Rado were high on something when they wrote the book and lyrics, particularly in the second half’s hallucinogenic trip sequence.

But from the opening song Aquarius all the way through to Let the Sunshine In, which begins almost as a lament and turns into something more optimistic, almost every song in Galt MacDermot’s score is a tuneful cracker. One number – Manchester, England – has added appeal, given the location of this revival, and choreographer William Whelton plays to it wittily with a display of umbrellas that nods to the city’s famed weather.

Unlike Daniel Kramer’s 2005 Gate dreadful revival, which attempted to update the show and turn the Tribe into protesters against the Iraq war, O’Boyle treats it as the period piece it undoubtedly is. But that doesn’t mean it lacks traction, particularly in the light of recent events in the US. When the arrogant, pleasure–obsessed Berger announces, “I’m going to stay high for ever”, you can’t help but be reminded that he is part of the baby boomer generation who reaped the benefits of the economic good times and whose self-interest may have played a part in putting Trump in power. This revival is a lament for lost innocence in more ways than one.

O’Boyle’s production is staged with far more dash than cash, and benefits enormously from a fine onstage band and a thrillingly talented, sweet-voiced cast. Robert Metson brings depth to Claude, torn between conformity and revolt, and Ryan Anderson’s Berger exudes a camp charisma. This is not a show in which anyone really gets a chance to develop a distinctive character, but they differentiate themselves vocally.

That’s particularly true of the female characters, who seem largely untouched by the impact of the women’s liberation movement, but who find their voices in song. Chloe Carrington as Jeanie finds every comic nuance in Air; Shekinah McFarlane is a ball of roaring energy as Dionne; and Laura Johnson, as Shelia, makes her mark with Easy to Be Hard and Let the Sunshine In. It’s shining brightly on Hope Mill.
Posted by overyourhead at Tuesday, December 06, 2016