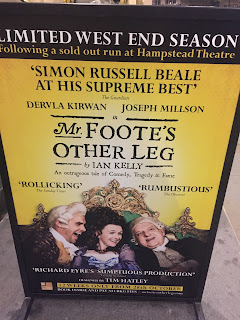 Last week Stuart and I ventured out to see Ian Kelly's riotously funny and critically-acclaimed Mr Foote's Other Leg at the Theatre Royal Haymarket in London's glitzy West End.

This is the precise theatre Samuel Foote managed from 1746, pushing the boundaries of performance in order to avoid the Licensing Act and securing the Royal Charter from Prince George, set at a time of great upheaval as the country battled to keep America.

The bawdy comedic tone is quickly established starting with the theft of a dead man's artificial leg which sets up an energetic performance that keeps the laughs coming at every turn. Most of the action takes place in the dressing room of the Haymarket though for this is a play chiefly about actors, darling.

This "ode to theatre" stars Simon Russell Beale as Foote and is joyously supported by Micah Balfour, Dervla Kirwan and Joseph Millson.

The Georgian setting has much historical truth and the combination of real-life dramatis personae, which ranges from David Garrick to Benjamin Franklin and King George III, lends weight to this outrageously funny historical drama that entertains and educates in equal measure.

But beneath the quick fire dialogue and perfectly judged physical humour lies a truly moving story about an actor with a secret. Underneath the superficiality of the makeup and wigs lies a physically and mentally broken soul, forced to hide his sexuality and suppress his true feelings. Like many people, the comedic mask is used as a barrier for these complex emotions, and Simon Russell Beale provides sufficient layers to the eccentric character for us to see where the true heart of the production lies.

I found myself rushing home to read up more about this most fascinating 'foote' note in history.