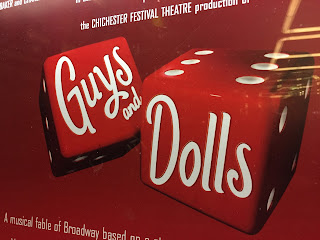 Last night Stuart and I went to see Frank Loesser’s Guys and Dolls at the Savoy Theatre in London's glitzy West End.

Following on from the success of last year's Gypsy at the same venue we had very high hopes. Perhaps too high.

First the bad stuff - the show is terribly sexist with its gambling guys trying to avoid marriage and it's 'dolls' only after one thing - marriage. The first half flags a bit with few hits and the two main romantic leads seem to have little chemistry between them...

But that said... it's a fabulous witty show! Energetic, vibrant, funny and a second half that simply glows and has hits galore. It's almost as if it's two different shows!

Jamie Parker plays serial gambler Sky Masterson who accepts a bet to take New York Salvation Army mission-girl Sarah Brown (played by Siubhan Harrison) away on a trip. The two end up in love (after he gets her drunk mind you) and after many shenanigans he forces all the neighbour-hoods to attend a midnight prayer meeting to save Ms Brown's mission from closure.

David Haig (yes, him off of The Thin Blue Line) decently plays Nathan Detroit a small-time hustler who for fourteen years has been engaged to Miss Adelaide played superbly by Sophie Thompson (yes, Emma Thompson's sister).

In fact Sophie Thompson simply steals the show with rousing rounds of applause at her every entrance and exit. She has perfect comedic timing, can sing up a storm, when in a dancing line of tiller girls all eyes are on her. Take Back My Mink is a brilliant comedic masterpiece of musical theatre and Ms Thompson nails it. Why she can make a song about catching a cold (Adelaide’s Lament) silly, sad and funny all at the same time. Give the 'doll' a BAFTA!

Elsewhere in the second/better half Luck Be A Lady is a stonking gambling hit set in a drain with wonderful dancing that you think will be the show-stopper of the night. But oh no, along comes the barn storming hot hit Sit Down You’re Rockin’ the Boat with its three encores. What a production number!