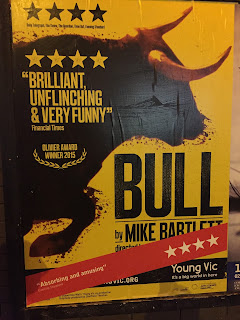 Last Friday night Stuart and I went to see Mike Bartlett's play Bull at the Young Vic in London's not so glitzy Waterloo.

His recent King Charles III and Game at The Almeida were great as was his Doctor Foster on telly last year so we had high hopes and had heard good things.

But wow, it was brutal; tense, provocative, painful, and powerful.

The action takes place in a sort of boxing ring with the audience able to stand ringside. We then got a very up close and personal view of 55 minutes of naked, raw, toe-curling bullying.

The play consisted of three candidates up for two jobs due to a company downsizing. As the three suited suitors all wait for their boss by the water-cooler we soon find out that one of them is for the chop. But which one?

Two of the candidates have obviously got a plan and execute is perfectly. They turn upon the third - firstly rather gently but then increasingly perniciously. Think the vilest scenes from BBC's The Apprentice and you're on the right track.

Thomas (Marc Wootton) is lumbering, less agile then his two bullying colleagues, who know just how to stir him up to the point of a bellowing rage. Tony (Max Bennett) is a ruthless alpha male desperate for his co-workers to caress his well-honed torso. Isobel (Susannah Fielding) is a women who uses her sexuality to make Thomas so uncomfortable he’s drenched in sweat, as she switches from flirtation to taunts to revelations of child abuse.

The two 'matadors' goad, tease and taunt their 'bull' until he becomes crazed and finally lashes out. Even when the boss arrives our 'bull' has been so wounded we can't think he can survive. Or will he?

It's a well written piece and brilliantly acted but boy is it a tough watch.

Recommended - if you have a strong stomach for a bully.
Posted by overyourhead at Tuesday, January 12, 2016