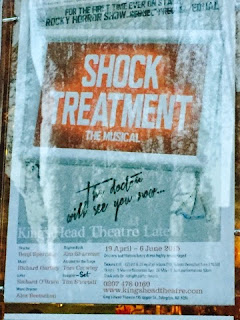 Written by the same team (and as a sequel) to The Rocky Horror Show the action takes place in Denton, USA - a small American town where the local television station is putting on increasingly bizarre shows. Rocky hero and heroine Brad and Janet are first exposed to husband and wife co-presenters Ralph and Betty Hapschatt as audience members on their game show Marriage Maze. Brad is soon dragged off by brother and sister doctors Cosmo and Nation McKinley and Janet is given a taste of show-biz as station owner Farley Flavors moulds her into a singing diva superstar.

Dances are danced, songs are sung, clothes are shed. All very Richard O'Brien.

The humour is dark and subversive. Four or five of the songs are good. The rest a bit meh. The whole show simply reeks of Rocky though. Which is a good thing!
Posted by overyourhead at Friday, April 24, 2015