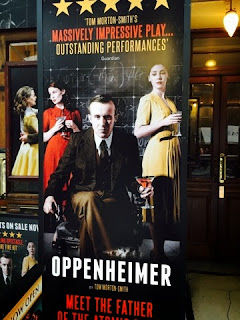 Last night Stuart and I went to see Oppenheimer at the Vaudeville Theatre in London's glitzy West End.

Oppenheimer the play tells the story of Robert Oppenheimer the man who led the team that created the atomic bombs released on Hiroshima and Nagasaki and had to live with the moral consequences of his discoveries: “I feel,” he says, “like I’ve dropped a loaded gun in a playground.”

We watch his transition from card carrying communist to flag-waving US military bomb maker as the play treats us to scenes of 1940s academia, a few basic nuclear physics lectures, a student anti-Fascist fundraising party, many war-time arguments and the gradual erosion of idealistic notions to the hard realities of war.

Truly Oppenheimer has 'become Death, the destroyer of worlds.'

My only criticism of the play is the three hours running time. It could have been half the length and told the same story with a bit more urgency.
Posted by overyourhead at Friday, April 17, 2015