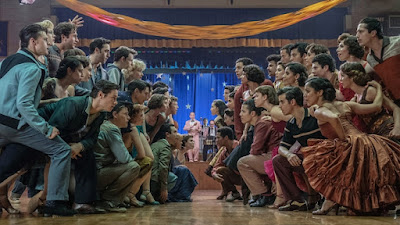 Rachel Zegler and Ansel Elgort portray Maria and Tony, whose ill-fated romance flags the fires of the bitter rivalry between local New York street gangs the Sharks and the Jets. David Alvarez plays head Shark and Maria's brother Bernardo, and Mike Faist plays head Jet Riff. Rita Moreno, who won an Oscar for her performance as Anita in the 1961 film adaptation of the musical, appears in the remake in a new role and also serves as an executive producer. The remake is written by Tony Kushner.

On the whole I loved it. I only have a few quibbles - some of the casting was a little off (Elgort was a bit flat) and a couple of plot changes seem like slight missteps. But it is a great achievement and definitely a must-see film.

Much of the film is in Spanish reflecting the greater emphasis on the Puerto Rican characters' experience. To that end, it's hard to overpraise Ariana DeBose, whose Anita is the wounded soul of the film. She has the best lines, dances and sings with so much passion.

When she sings the fabulous song America through the streets of New York with gusto, glee, and humour the screen can hardly contain her. It was the highlight of the film for me and worth the ticket price alone.
Posted by overyourhead at Wednesday, December 01, 2021