Dina Martina - The Christmas Show @ Soho Theatre... "Something borrowed, something blue, ’round the corner fudge is made." 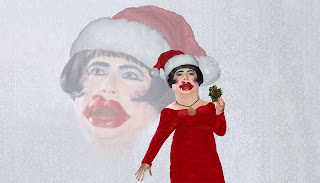 As you Brits say at Christmas: "Something borrowed, something blue, ’round the corner fudge is made."

We'd seen Dina perform before at the same venue and in Provincetown.

Dina Martina's shows are a mash-up of live singing (off-colour and off-key), outrageous costumes, and hilarious video montages. It's a very knowing, high camp drag show and very funny. The show was called The Christmas Show and featured Madonna, the Beatles and a lot of changed lyrics.

I'm sure Madge and McCartney would both laugh at their songs being lovingly murdered by an overweight drag queen with a quick wit and sparkle in her eye. My sides were literally aching from laughing.

Other comedic reinterpretations were Mungo Jerry's In The Summertime (as an attack on American over-consumption) and that classic Fever (re-worded as an attack on the anti-vax lobby). We were also treated to Dina's favourite - an extended story about earthquake clowns(!)
Posted by overyourhead at Thursday, December 23, 2021