The Book of Dust La Belle Sauvage @ The Bridge Theatre... 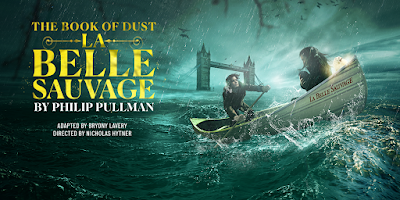 Last week Stuart and I had the pleasure of seeing the wonderful Book of Dust La Belle Sauvage at The Bridge Theatre in London's glitzy London Bridge Quarter.

There are vast ideas in this, Philip Pullman’s prequel to His Dark Materials. We are in a same fictional multiverse with mysterious dark matter, a corrupt religion, magic and swirling science and metaphysics. Mix in an serial abuser, a flood and a youthful heroine (Lyra Belacqua) prophesied by witches to save the world, at the centre of the vortex and you are on to a winner.

Or to be more exact, *another* winner. Director Sir Nicholas Hytner scored with Pullman’s original His Dark Materials at the National Theatre back in 2004. Here adapted by Bryony Lavery, this Hytner’s production, co-directed by Emily Burns and James Cousins, is another triumph.

We’re in Oxford, 12 years before His Dark Materials begins; there are no armour-clad polar bears this time, and Lyra is still a baby. Her destiny already foreseen, she’s living in the secret care of kindly nuns at a Thameside priory. 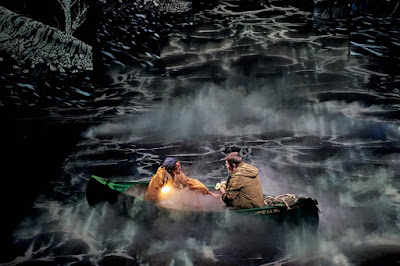 Sinister forces are circling Lyra. Religious organisation the Magisterium, tightening its repressive grip on secular government, recognises her as a threat.

In the Oxford colleges, meanwhile, academics are trying to unravel the heretical enigma of Dust, cosmic matter associated with consciousness, and therefore with freedom of thought.

When torrential rain causes biblical flooding, Malcolm and Alice take to the water with Lyra in Malcolm’s canoe, La Belle Sauvage, on a voyage to keep the infant safe.

It's a dense thicket of plot, but Creasey’s likeable Malcolm copes perfectly. The equally perfect Bob Crowley’s sets and Luke Halls’s video give the teeming rain and bucolic backdrops a flavour of William Blake’s prints, and the canoe glides elegantly around.

The daemons – animal companions every Pullman human possesses, the outward manifestation of their soul – are superb: designed by Barnaby Dixon, they’re papery puppets with torchlit eyes.

There is plenty of menace too - scenes of schoolchildren, drunk on totalitarian power, re-educating their teachers are chilling, as is a moment when Lyra – played by a real baby – is imprisoned in a ward lined with cots. 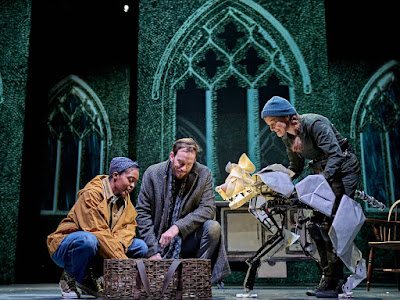 The take home is grown-ups are not to be trusted; Malcolm and Alice, adolescent surrogate parents to the vulnerable Lyra, are a poignant symbol of hope.

I had a genuine star sitting next to me in the audience: Adjoa Andoh (or as Stu calls her: Martha's mum)
Posted by overyourhead at Tuesday, December 14, 2021