The Duchess of Malfi @ Almeida Theatre... 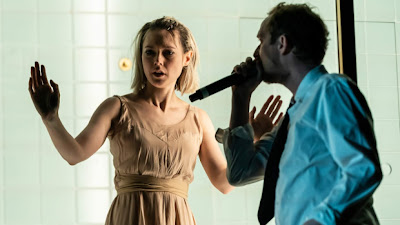 Last night Stuart and I went to see Jacobean revenge tragedy The Duchess of Malfi at the Almeida Theatre in London's glitzy Islington.

Written by English dramatist John Webster in 1612–1613 the play is famous for its violence and for its line, "We are merely the stars' tennis balls, struck and bandied which way please them."

Directed by Rebecca Frecknall, The Duchess of Malfi can be a challenging play. The Duchess is a widow in a position of power yet constrained by the will of her overbearing brothers. She defies them to marry her steward, Antonio, in secret. In a plot full of violence and madness, she gives birth to three children without confirming their father's identity. The brothers are incensed, and bloody tragedy ensues.

The action takes place on a set (designed by Chloe Lamford) which consists mainly of a wide glass box. Frecknall avoids simple melodrama; instead, an air of sadness prevails.

Scenes are labelled: "A Birth", "A Trap" etc. and actors often move in slow motion. Nevertheless, all the characters are allowed a degree of humanity and ultimately it all pays off, speeding to the horror of the final image: the slow piling up of bodies to the mournful strains of "Dido's Lament".

Central to a fine ensemble are two outstanding performances: Lydia Wilson (nominated for an Olivier Award for her Kate in Charles III) in the title role, and Leo Bill as Bosola. Wilson is authoritative, affectionate, desperate, but stoical in death. The line "I am Duchess of Malfi still" is a reclaiming of herself rather than defiance of her murderer. Bill is sensational, finding every nuance of a complex character, disaffected by his lack of status, a cunning spy for jealous brother Ferdinand (Jack Riddiford, hinting early at instability) then longing for redemption.

Women are central throughout. Even in those final moments, as men die, the music is the lament of a woman betrayed. Finally, the devastation is silently surveyed by the Duchess' young daughter.

Posted by overyourhead at Friday, December 13, 2019