My Brilliant Friend Parts One and Two @ Olivier Theatre... 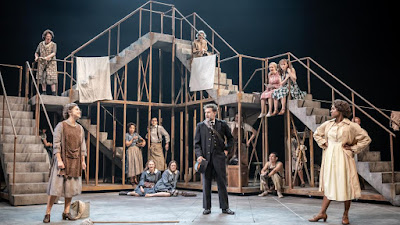 The story centres around two women, Lila and Lenu; their childhood and how their journey to adult life intertwines as they grow up in Italy (Naples and Florence) from the 1950s right through to the 2010s.

Condensed from four books, into two plays, over almost six hours, by the end we two were utterly exhausted.

It's not that the soap opera plot is weak - there is much to admire - it's just there is just so much of it. To cram it all in, there are large sections when the characters simply recount what other characters have been doing in the meantime; "She said this, he said that, she did this, he did that, they went here, they went there..." It was draining. And while the play was in this 'tell don't show' mode there were a lot of people standing around listening; including us.

That said, the production was good; the feminist tracts were great, the gambol through modern Italian history fun, and the two leads (Catherine McCormack as Lila and Niamh Cusack as Lenu) solid.

The set was nice too - impossible staircases swung to and fro like graceful dancers. The female characters, when being attacked or molested, turned into floating dresses tumbling into the action instead. The music was fun too - helping set each scene to its correct year.

It's just it was all so long. We heard a fair bit of snoring near us.
Posted by overyourhead at Monday, December 09, 2019