With our jet-lag finally subsiding we were finally getting into our stride of trying to act like full-on New Yorkers. We shopped, we looked at some art, we walked the High Line, we complained about the tourists, and we sat in a number of bars remembering how things used to be.
A belly full of art, a belly full of beer, and belly-aching about the past. Yes, we are becoming the new New Yorkers!
The shopping mainly took place in the Times Square branch of American Eagle as Stuart replenished his summer collection. They say here, "if you can't get it in New York, you can't get it!" which in my experience seems to be a truism.
Also the temptation to put just more thing in your shopping basket seems to be a very New Yorker thing too. Indulgence seems to be a common trait. Jo and I were much more restrained though!
Then we three headed up to the Museum of Modern Art to oogle with the best of them. MoMA houses an incredible collection of painting, sculpture and design from the past 140 years or so.
MoMA also plays a major role in developing and collecting modernist art, and is often identified as one of the largest and most influential museums of modern art in the world. MoMA's collection offers an overview of modern and contemporary art, including works of architecture and design, drawing, painting, sculpture, photography, prints, illustrated books and artist's books, film, and electronic media.
Considered by many to have the best collection of modern Western masterpieces in the world, MoMA has more than 150,000 individual pieces in addition to approximately 22,000 films and 4 million film stills.
The collection houses such important and familiar works as the following:
Francis Bacon, Painting (1946)
Umberto Boccioni, The City Rises
Paul Cézanne, The Bather
Marc Chagall, I and the Village
Giorgio de Chirico, The Song of Love
Salvador Dalí, The Persistence of Memory
Max Ernst, Two Children Are Threatened by a Nightingale
Paul Gauguin, Te aa no areois (The Seed of the Areoi)
Albert Gleizes, Portrait of Igor Stravinsky, 1914
Jasper Johns, Flag
Frida Kahlo, Self-Portrait With Cropped Hair
Roy Lichtenstein, Drowning Girl
René Magritte, The Empire of Lights
Kazimir Malevich, White on White 1918
Henri Matisse, The Dance
Jean Metzinger, Landscape, 1912–14
Piet Mondrian, Broadway Boogie-Woogie
Claude Monet, Water Lilies triptych
Barnett Newman, Broken Obelisk
Barnett Newman, Vir Heroicus Sublimis (Man, Heroic and Sublime)
Pablo Picasso, Les Demoiselles d'Avignon
Jackson Pollock, One: Number 31, 1950
Henri Rousseau, The Dream, 1910
Henri Rousseau, The Sleeping Gypsy
Vincent van Gogh, The Starry Night
Andy Warhol, Campbell's Soup Cans
Andrew Wyeth, Christina's World
We saw as much of it was we could. But our head were spinning with it all. So much so we felt we had to walk out off.
And walk we did, all the way down to 34th Street to join the start of the now world famous High Line. The High Line, as you may know, used to be an old elevated coal track that delivered coal deep into the heart of the city. It has now been turned unto a very (very!) popular city park. The walkway was packed, it being a holiday weekend in the States. We were soon belly-aching like the locals on how crowded the city was getting these days. The irony of our position not being lost on us.
Continuing south we walked through Chelsea and into Greenwich Village. There we stopped for a spot of lunch at The Spotted Pig before wandering along the famous gay, Christopher Street and ending up in the even more famously gay Stonewall Inn.
Stonewall was of course the location of the now famous Stonewall riots that for many signalled the start of the modern fight for LGBT rights that continues today exactly 50 years later.
We got chatting to some people inside, made some firm beer-friends (hello Dil, hello Matt) and chatted to some uniformed sailors who now definitely "do ask" and "do tell."
Being in U.S. military service and being gay, lesbian or bisexual (but pointedly not being trans - thanks to Trump) seems to be perfectly ok here. As it should be, I might add.
A few beers later, we headed back up to our hotel to freshen up. And in doing so we did one last thing to complete our conversion to being new New Yorkers. We flagged down a big yellow taxi. Big tick in a big yellow box.
Refreshed, we then headed back down into the East village to grab a pizza and meet a couple of friends of ours, Keith and Martin.
We met them at The Cock, which was no longer the bar we remember it to be from a few years back. The Cock had moved, and in doing so had got way, way, way(!) more sleazy. Put it this way, there was plastic covering on the seats. We only managed to last a couple of beers before we made our excuses and left.
Laughing we stumbled out and stumbled home.
Another fun day in the Big Apple. 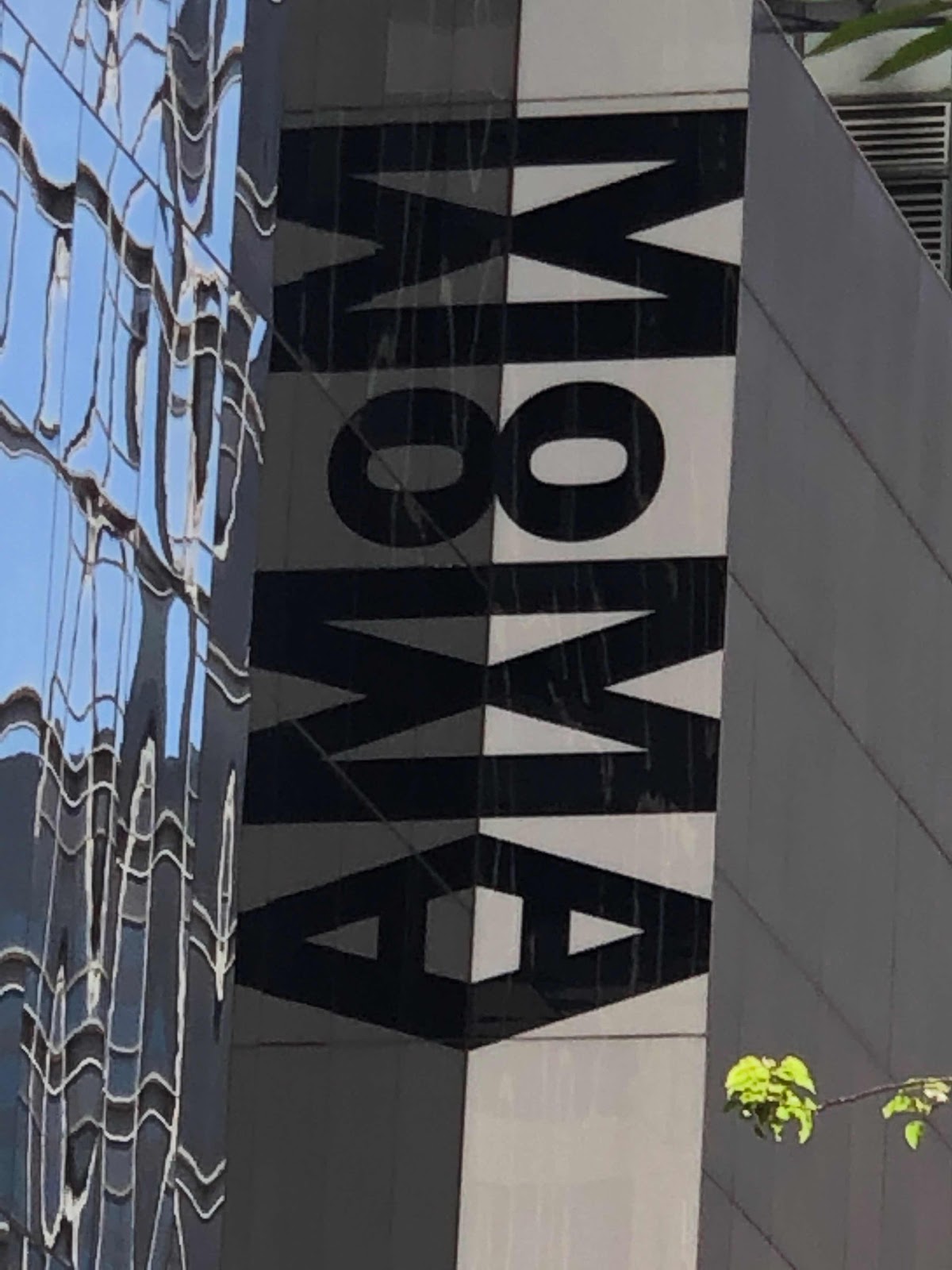 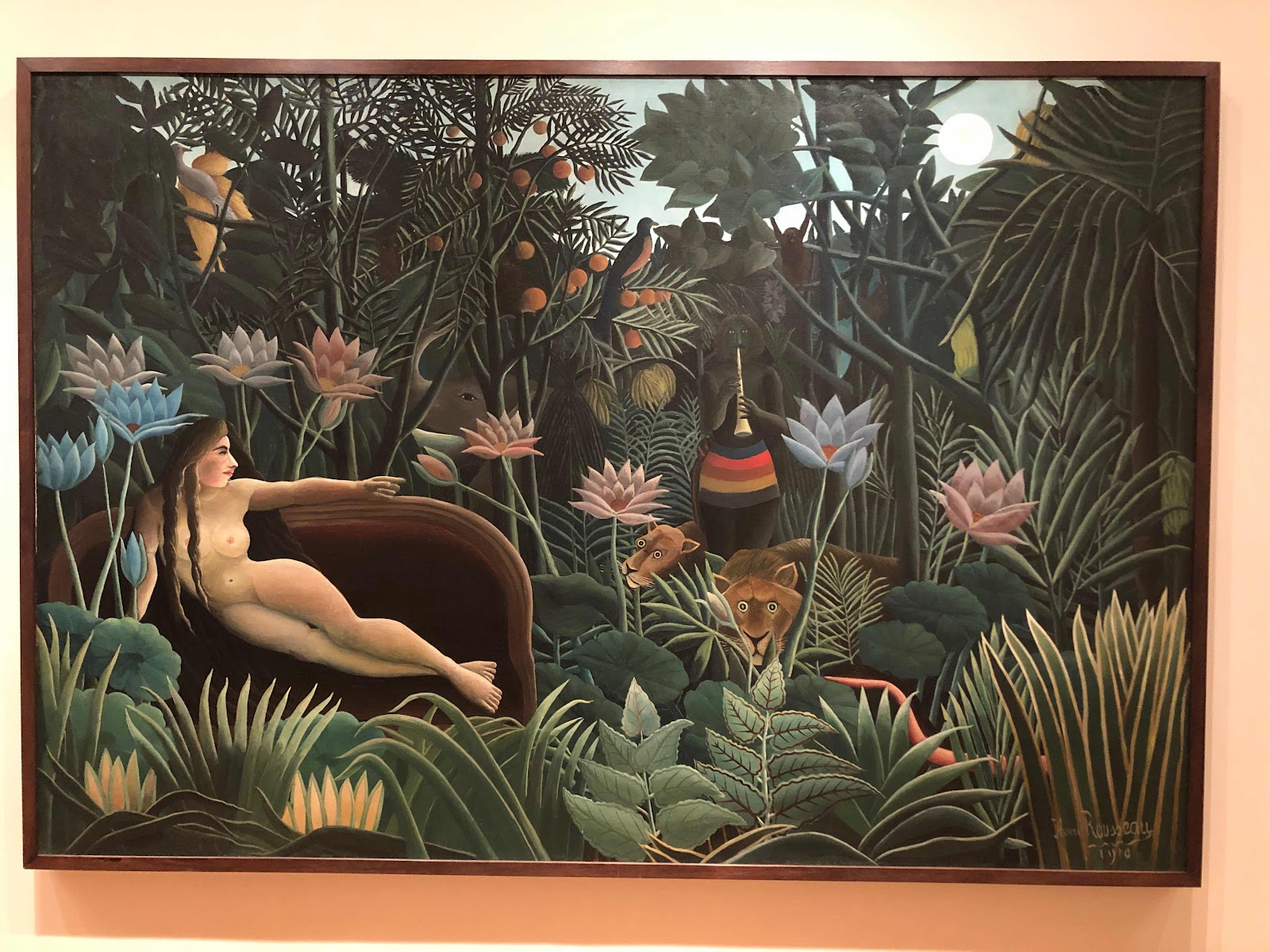 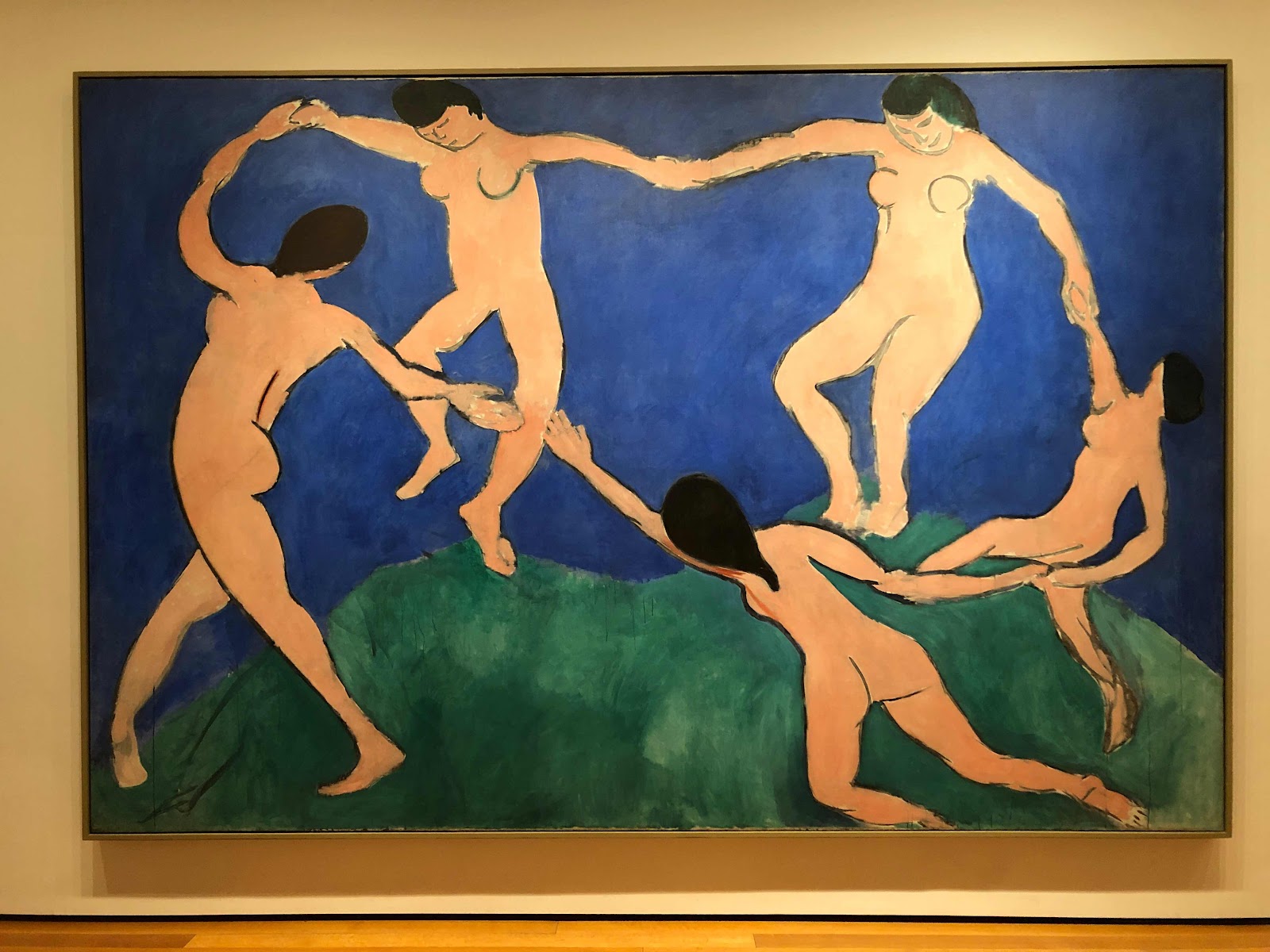 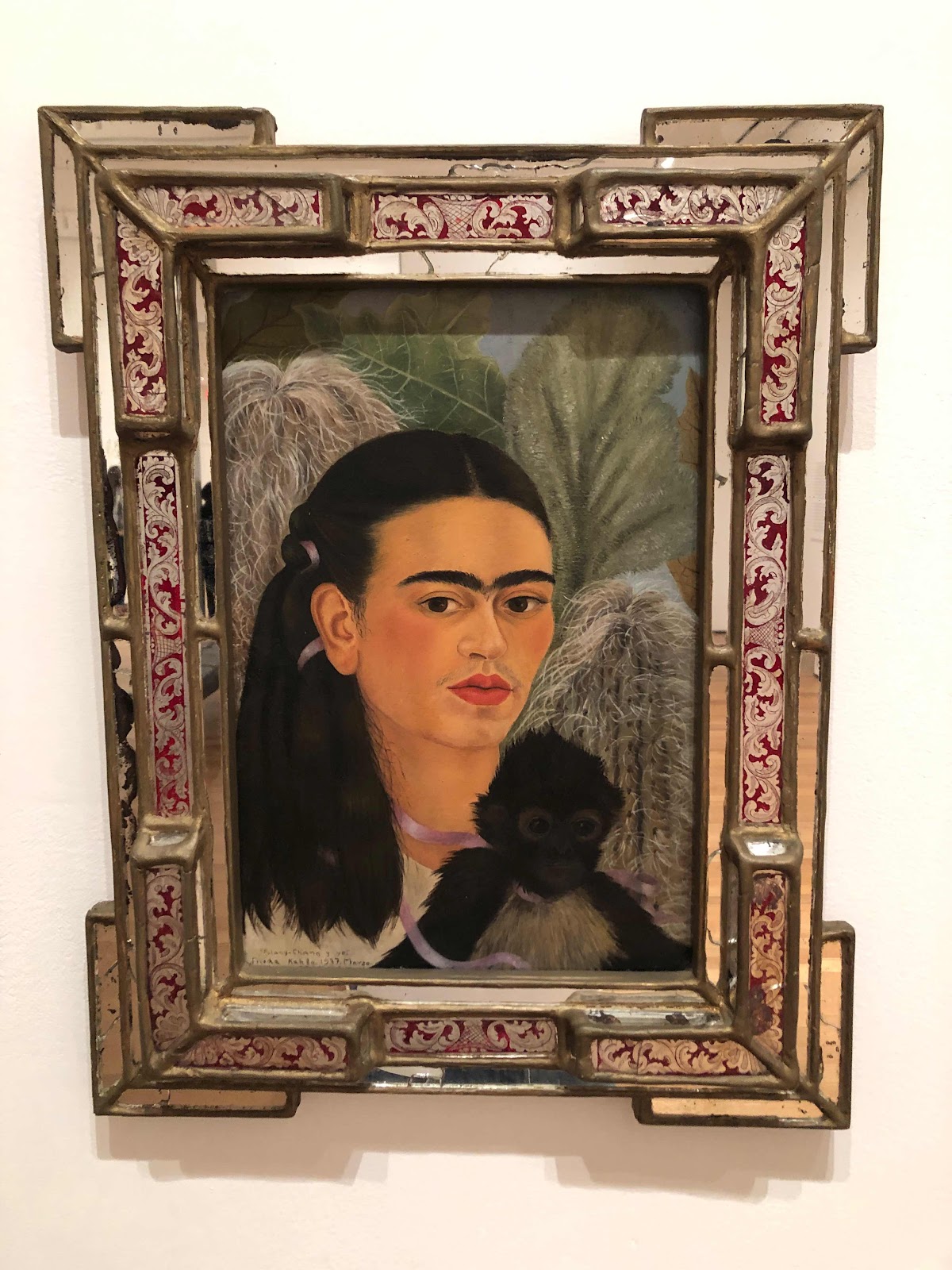 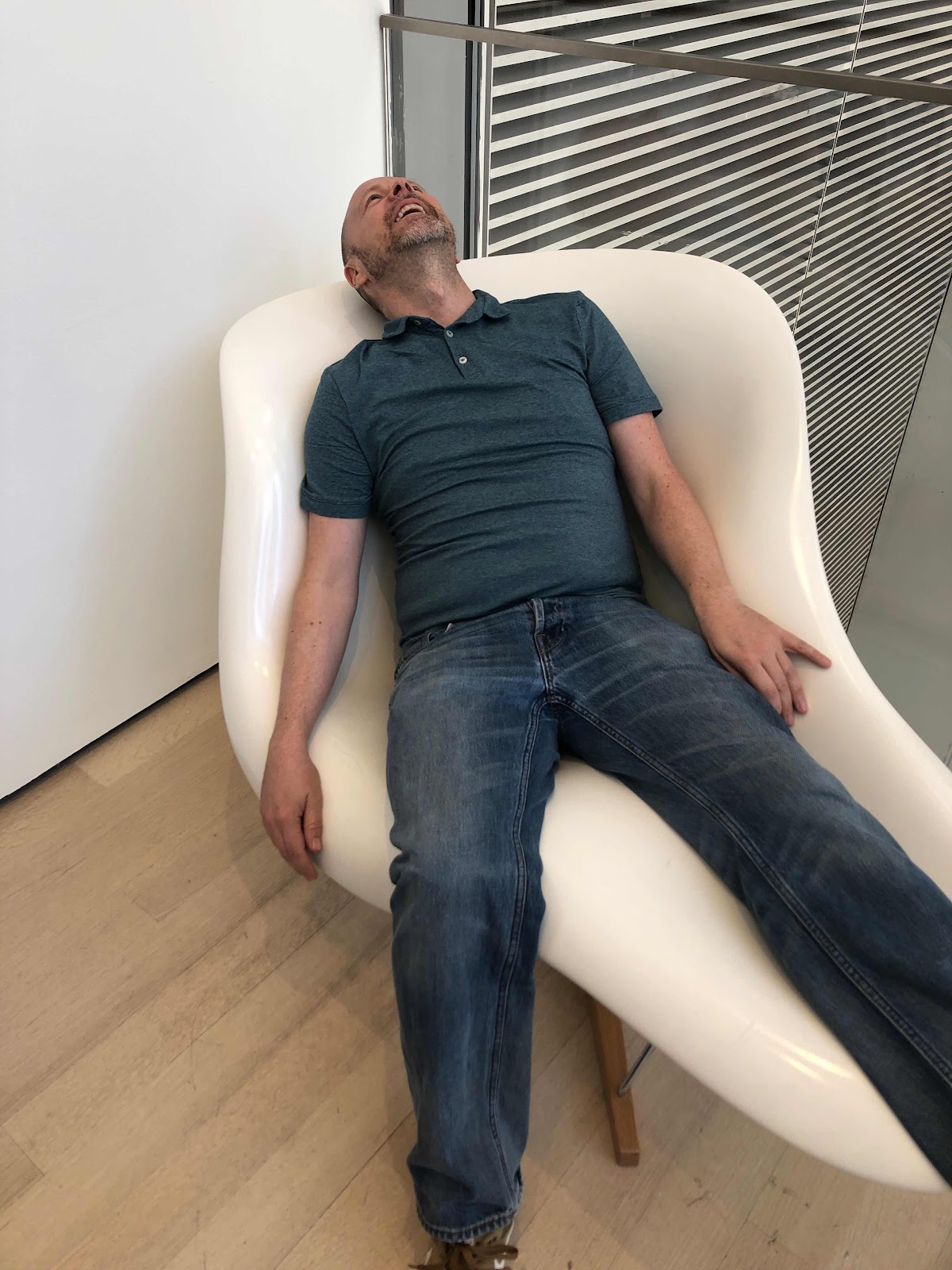 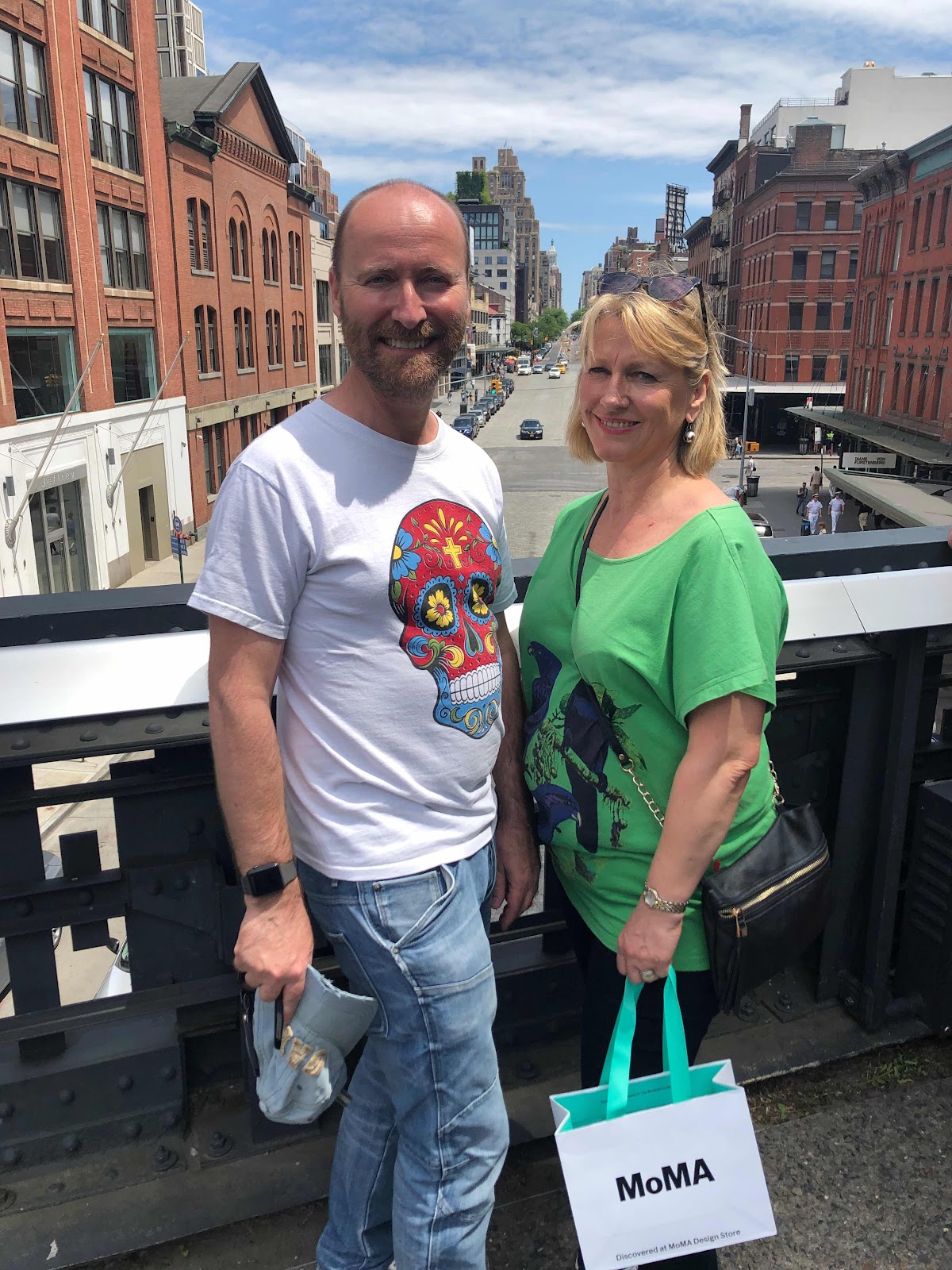 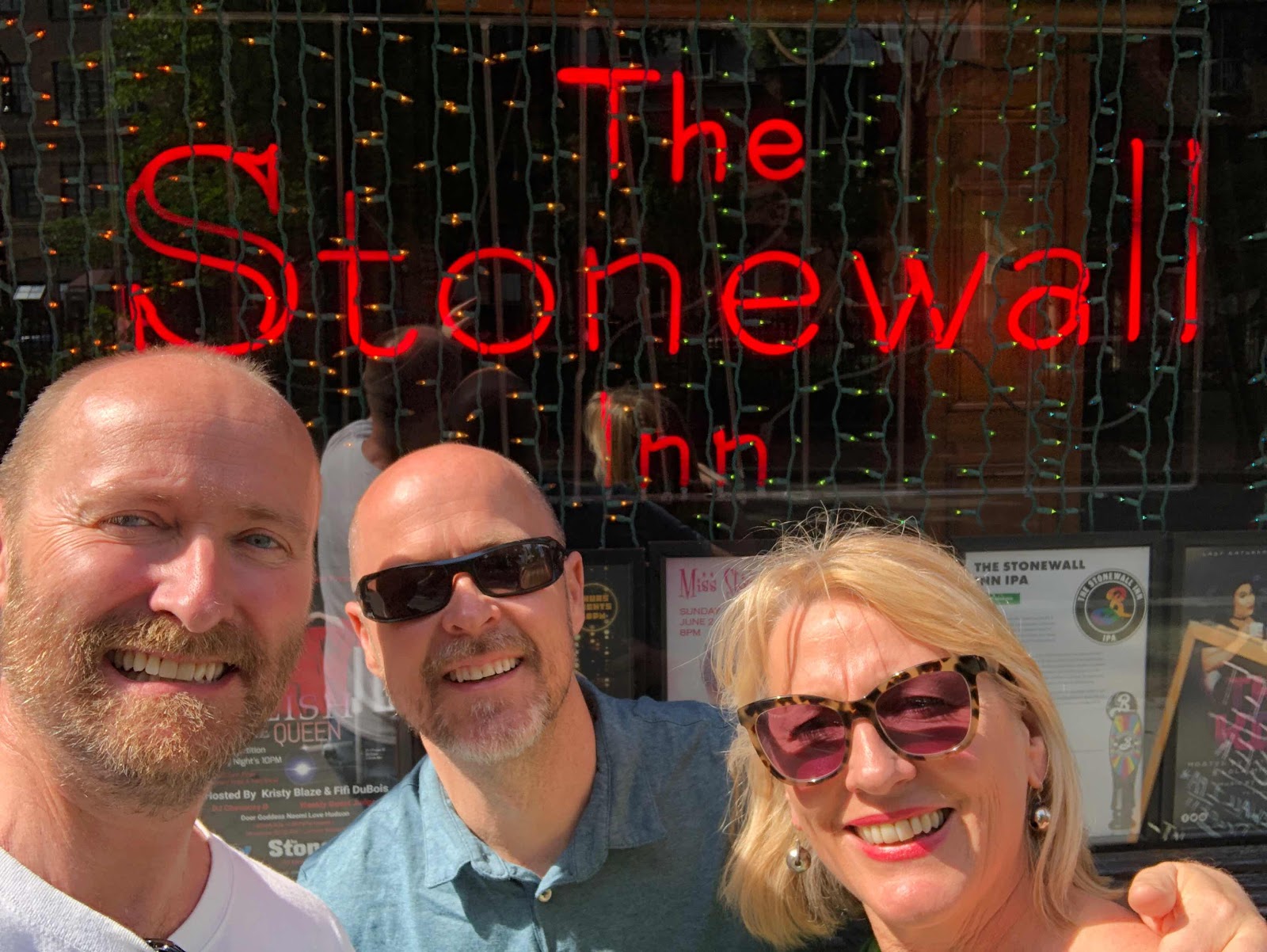 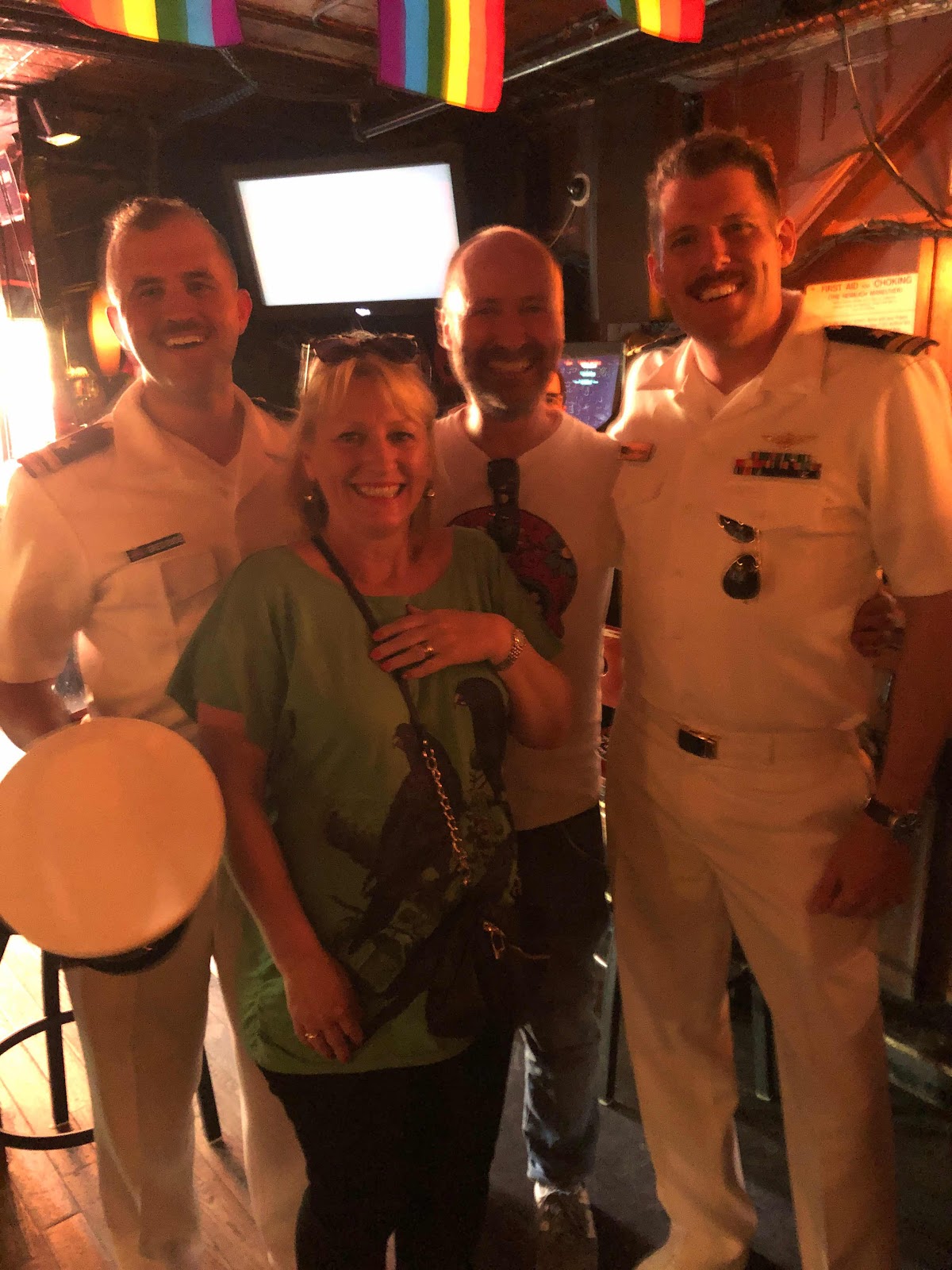 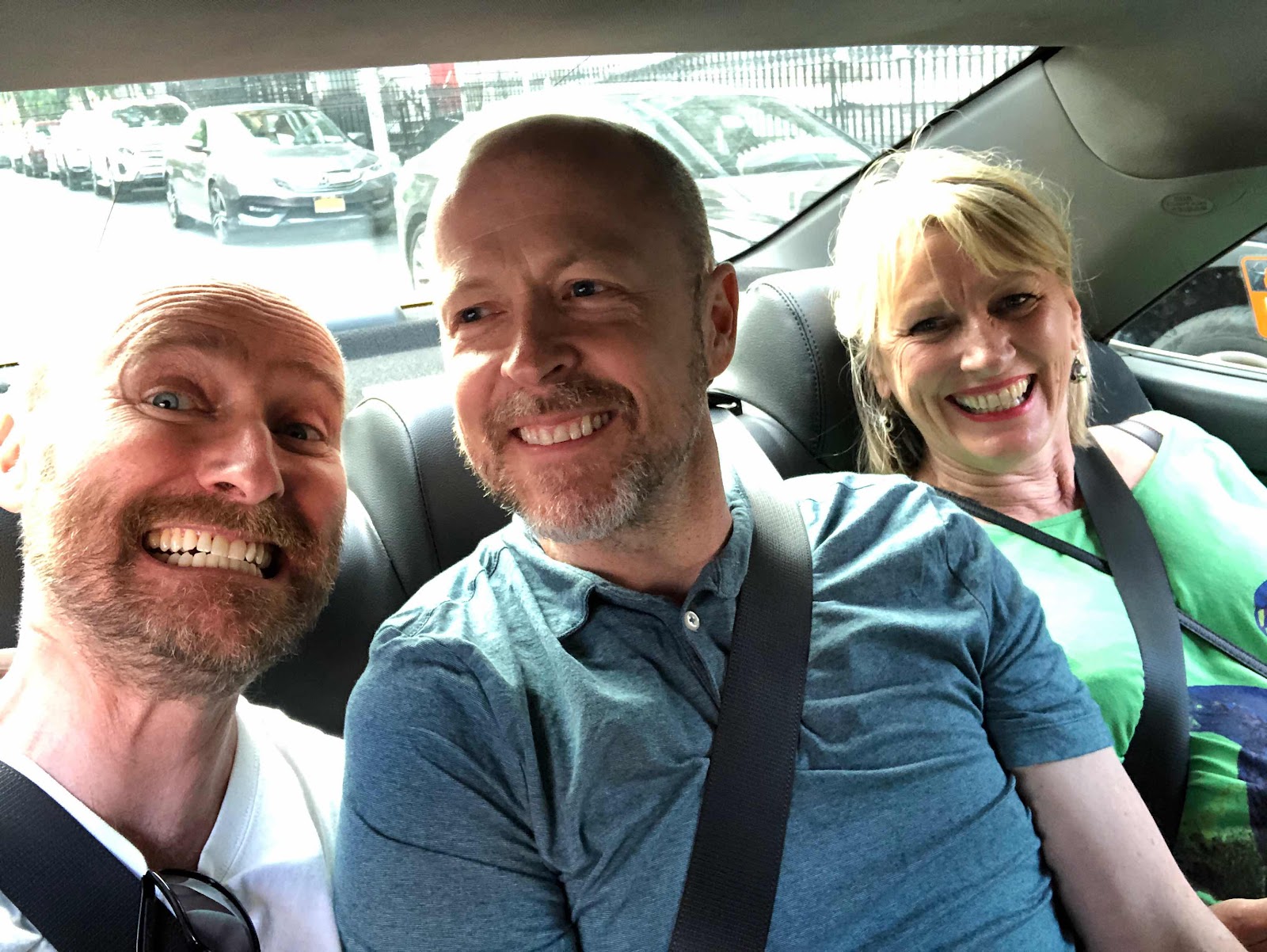 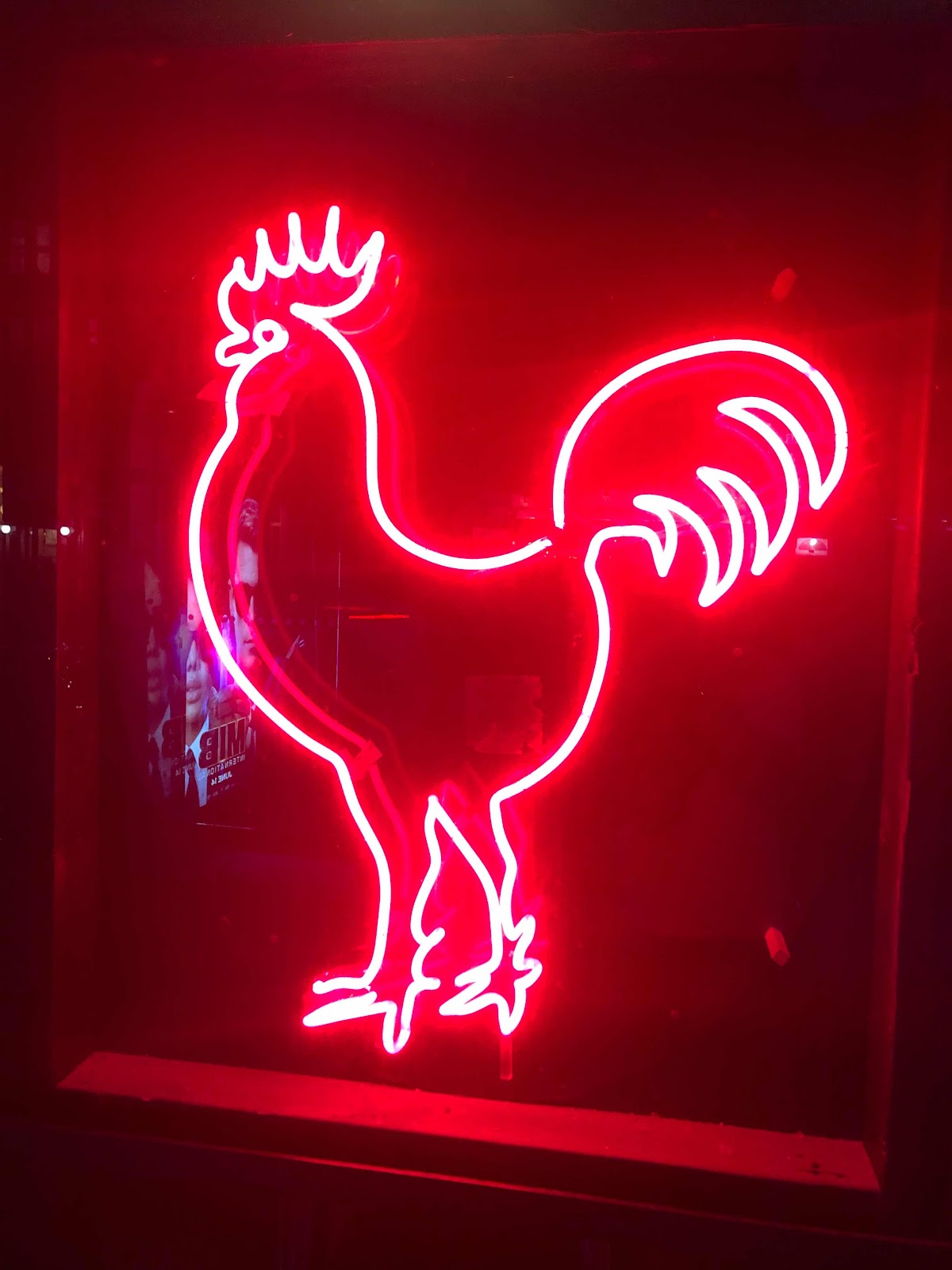