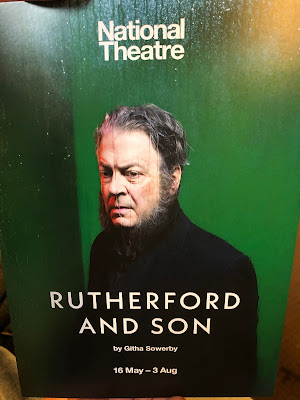 Githa Sowerby is not well known today, but back in 1912 she became a highly successful playwright at a time when female voices were rarely heard onstage. Her play Rutherford and Son was an overnight blockbuster, one critic declaring it "one of the most powerful works of the younger generation" with favourable comparisons to works by Chekov and Ibsen. The National Theatre has now revived her lost masterpiece for a modern audience.

The play sees Roger Allam (Les Miserables, The Thick of It) cast as John Rutherford, the domineering head of a family-owned glass factory in Glasgow. Unrestrained by 'trivialities' like Unions or Women’s Rights, Rutherford’s constant bullying of workers and family in pursuit of profit inevitably lead his family down the road to oblivion.

Allam’s swerves the classic angry old man persona though, immortalised by his jowl-wobbling yells as The Thick of It's Conservative Minister Peter Mannion, for a more restrained tyrant. He plays a flawed character with a straight bat - whose unrestrained power stretches and ultimately breaks the bonds that tie a family together.

Sam Troughton plays the eponymous son - over-educated, frustrated, and urging to break free of his father with his big new idea. Justine Mitchell plays a daughter trapped in the loveless family, treated as a servant, but dying to declare her hidden love. They are both wonderful from the Beginning.

When the father schemes to steal his son's big idea from under his nose - claiming it will be for the ultimate benefit of the entire family, it in fact is its undoing.

The three-hour running time could have perhaps been trimmed a bit though.
Posted by overyourhead at Tuesday, May 21, 2019