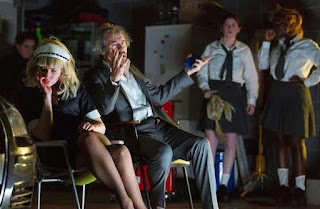 Last Thursday night Stuart and I went to see Martin Crimp's When We Have Sufficiently Tortured Each Other at the Dorfman Theatre on London's glitzy South Bank.

Advance reports of a person fainting in the stalls suggested we might be in for something shockingly sensational. The blunt truth, however, is that Martin Crimp’s play – subtitled "12 Variations on Samuel Richardson’s Pamela" – proves to be a diagrammatic exploration of modern sexual mores shorn of any social context. It's not shocking. Just a bit boring.

The stage is the garage of a suburban house, evocatively built by breezeblocks and beams, filled with all the trappings of family life including an Audi car. Role-playing dominates from the offset: characters enter with tape over their mouths, dress up in costume, wordlessly, while a pulse-raising score makes you feel immediately anxious.

And it is certainly left to the admirably uninhibited central performances of both Cate Blanchett and Stephen Dillane, to literally put some flesh on a drily cerebral text. Richardson’s 1740 novel shows a 15-year-old serving girl resisting a predatory master before finally marrying him. 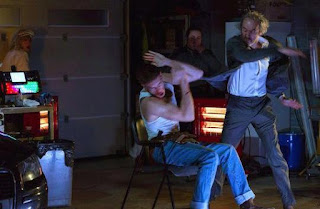 Fortunately, the two actors are highly watchable. Blanchett has an extraordinary capacity to shift vocal and physical registers. As a woman, she seems wily, guileful and undefeated: when she strokes the man’s thigh with an elegantly stockinged foot she invests the gesture with irony and even makes her fetishistic assumption of a wedding dress feel like an act of protest. However, when she becomes the male tormentor, she makes expressive use of deep chest-notes without ever lapsing into vicious caricature. As we know from her previous work in film and theatre, she is a consummate actor.

Mostly, the rest of the cast has very little to do, though there’s a great turn from Jessica Gunning as the man’s vulnerable/seductive housekeeper Mrs Jewkes – even if some of Crimp’s lines about her weight are profoundly hard to love.

The twelve scenes (signalled with lights switching on and off) are rigorously repetitive, vacillating around the same violence and sex without developing into anything more. You begin to give up even bothering to decode the discourse, and feel relieved when it’s over.

Clearly this is a play that is supposed to be unsatisfying and challenging. But if you invest two hours in something and still struggle to distill any sense of significance, it inevitably feels pretentious. And considering the almighty talents and huge expectation surrounding this show, it’s especially disappointing to endure something so flat. 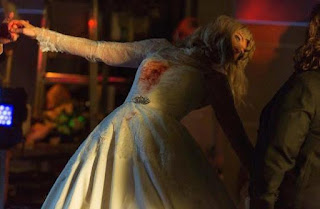 It does feel like a bit of a missed opportunity and I can’t help but wonder what might have been if Blanchett had decided to say screw it and do Hamlet or something. As it is, we have one of the greatest actors in the world using one of her occasional stage outings to star in an oddball S&M play that doesn’t quite work.
Posted by overyourhead at Saturday, February 09, 2019