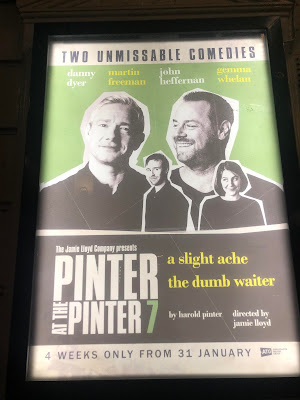 Last night Stuart and I went to see the first night of a brilliant pairing of Harold Pinter one act comedy plays at the Harold Pinter Theatre in London's glitzy West End.

Billed as part of the Pinter at The Pinter season, this night was called "Pinter Seven" being the seventh and final collection. Superbly directed by Jamie Lloyd, it was stylish double-bill by the great man.

Both plays explore Pinter's favourite theme - the political machinations of the powerful and the powerless.

The night started with A Slight Ache (1958), a tragicomedy, that sees the lives of Edward (John Heffernan) and Flora (Gemma Whelan) turned upside down when a mysterious figure, an old non-speaking Matchseller, enters their elegant country home. English xenophobia and paranoia run throughout as things take a darkly funny turn. Minor domestic insecurities soon snowball into out and out terror.

Produced as a radio play it was funny, unexpectedly odd, unsettling, and cleverly staged.

The other play was one of Pinter's most famous pieces, The Dumb Waiter (1957). Two hit-men, Ben (Danny Dyer) and Gus (Martin Freeman), are waiting in a basement room of a derelict building for their next assignment. The building used to be a restaurant and on one wall is a dumb waiter - a hatch with a small lift - that contains a plate. Next to the dumb waiter is a speaking tube. Everything is set for the orders to come.

And, as the men wait for their instructions as to who to kill next, they bicker over nonsense. Biscuits, items in the paper, and the semantics of "light the kettle" and "put on the kettle". We get to see the dynamics of power and the nature of a partnership.

In some sense, it is an absurdist comedy about two men just waiting. Waiting in a universe without meaning or purpose, like Samuel Beckett's Waiting for Godot. Only the twist here is that when the orders do come - neither of them expect it.
Posted by overyourhead at Friday, February 01, 2019