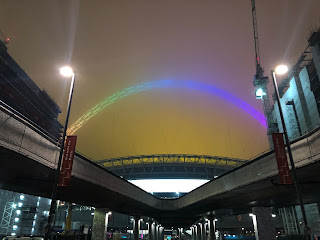 Back in 1991, I was on telly sitting opposite a man called Greg.

It wasn't the first time I had been on TV, or was it to be the last. But it was certainly the most confrontational. I appeared on Channel Four's feedback show Right To Reply a few days after ITV had televised the WBO super middleweight title boxing match where Michael Watson fought Chris Eubank. With its terrible consequences.

Watson had collapsed in the ring in the twelfth round. There was no ambulance nor paramedic at the event. Apparently, doctors wearing dinner jackets arrived after some eight minutes, during which time the fallen fighter had received no oxygen. A total of 28 minutes elapsed before Watson received treatment in a hospital neurosurgical unit. He spent 40 days in a coma and had six brain operations to remove a blood clot. He couldn't hear, couldn't speak, couldn't walk for 8 months. 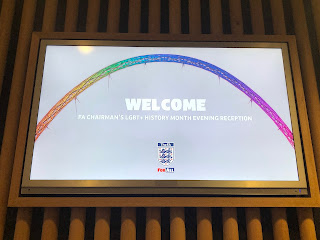 I had called Right To Reply after the match to complain about ITV Sport's coverage; the frenzied hype beforehand, the slow motion replays of the punches to the head with all the blood, the fact that afterwards we didn't know whether Michael Watson was dead or alive. Had we just seem a man die on live TV? There were no updates on the ITV News. They just cut to commercials and then showed a film. ITV were acting as if it didn't happen.

The following Friday I went to the C4 studio to have a head to head argument up against Greg Dyke (then Head of ITV Sport - later BBC Director-General - then later head of the FA) about the coverage. I think I gave a good showing (avoiding the easy trap of "we need to ban boxing" mantra.) Dyke is/was/always will be a worm though. He said ITV Sport was blameless. They took no responsibility for what happened on the night and said, "People could read about it in the papers the next day if they wanted." He went on to say he'd show bull-fighting on ITV Sport if he could and would bid for screening live capital punishment if hanging were to be made legal in the UK and would get good ratings. For some time after the screening people would stop me on the tube and congratulate me on my stance of taking him to task. 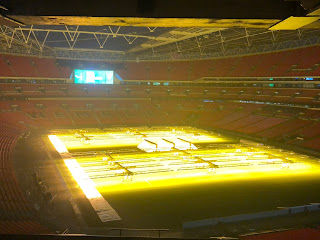 Last night, almost 28 years later I got to meet a second Greg. Not on TV this time, but face to face at an event at Wembley Stadium.

This Greg was Dyke's successor at the FA, Greg Clarke. And what a different Greg he was. After three years in charge, Dyke had left the FA in 2016 as he had struggled to reform the organisation. In his three years at the helm, Greg Clarke on the other hand has been transformative.

The event was the FA Chairman's LGBT History Month Reception. I got an invite as Secretary of the Arsenal Gay Gooners Supports Club and attended along with Chris, Basil, and Joe, our Gay Gooners Campaigns Officer.

We got to hear about multiple initiatives that Clarke has championed tackling homophobia, transphobia, and biphobia in the Beautiful Game. There was then a panel discussion run by Sky Sports hottie Mark McAdam with Craig Donald (FA Chief Information Officer), Kirsty Clarke (Stonewall Director of Sport), Danielle Carter (Arsenal FC), and Douglas Edward (Stonewall FC Captain and Global HR Director AON.) There were questions from the floor on a number of topics including issues about reporting homophobia, and Joe got to ask a couple of questions about homophobia at International venues and emerging fan support for the women's game. 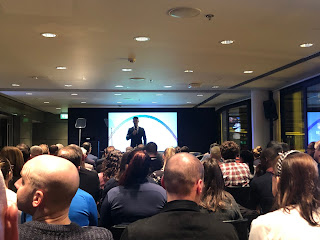 The FA now work closely with Stonewall, support the Rainbow Laces campaign, co-ordinate with grassroots organisations on LGBT+ issues, visit and seek concrete assurances from countries ahead of International competitions (most recently Russia and Qatar), and they now host LGBT+ events and matches at Wembley Stadium.

Clarke said he was especially proud of the suburb rainbow mosaic at Vicarage Road, the Stonewall FC win at Wembley, and the work of Lou Englefield of FootballvHomophobia.

There is still much to do, of course. But things seem to be going very much in the right direction.

Change has come from the top at the FA. 6% of the FA workforce are LGBT+, they have an out gay man on their board, and talking to their LGBT staff last night they genuinely say how supportive an environment the FA is now.

Things have indeed changed. Dyke was not only a worm, but a dinosaur. A dino-worm. Whereas Clarke is a progressive. Who says all Gregs are the same? 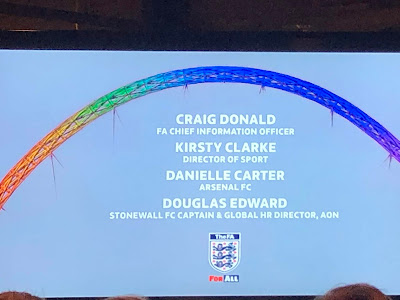 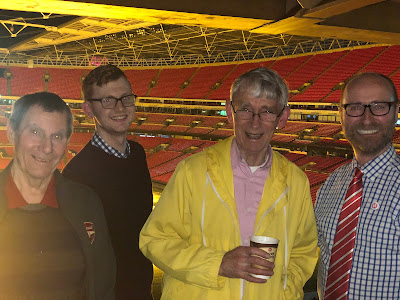 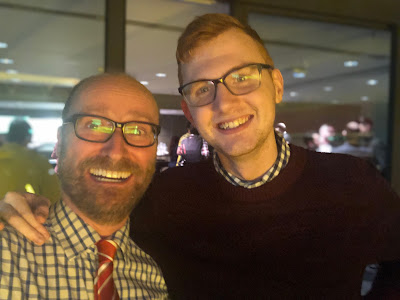 Posted by overyourhead at Wednesday, February 06, 2019