9 to 5 The Musical "with a couple of jars down your neck beforehand, it becomes reasonably watchable" @9to5MusicalUK ... 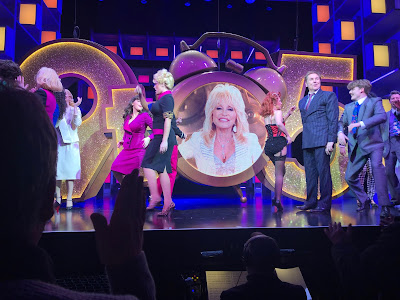 Last Friday night Stuart and I went to see Dolly Parton's 9 to 5 The Musical at the Savoy Theatre in London's glitzy West End.

At the end of the show, Dolly appears on a video screen:

"If you have enjoyed the show," she beams, "tell your friends! If you haven't, keep your mouth shut!"

Well, we 'quite' enjoyed it.

The show takes the 1980 Hollywood film 9 To 5, in which three city secretaries get even with their chauvinist boss Mr Hart, and runs with it.

The song '9 to 5' that, the show starts and ends with, is of course fantastic. The other songs are forgettable though. The three female leads are all very good but the material they have to work with is rather weak - which is odd, as Dolly is such a good songwriter. There is in fact a Dolly Parton character in the show who gets the best songs but the bonne amie soon peters out as the jokes start to fall flat.

It is not much of a surprise that the show fails the Bechdel Test so spectacularly in the first half - 1980s office, sexist boss, and female workers treated like serfs - but as the women take their revenge things do improve. The second half is better, partly because it is shorter, and relies less upon the plot and more on the song and dance routines.

There is much fun to be had in Bonnie Langford's repressed office manager stripping to her suspenders although Brian Conley as the egotistical supervisor plays it excessively broadly. He comes across as a moustache-twiddling pantomime villain rather than the evil, bigoted sexist he plainly is. We are meant to hate you, Brian, not laugh at you!

However, with a couple of jars down your neck beforehand, it becomes reasonably watchable, particularly for those with a taste for cheese.