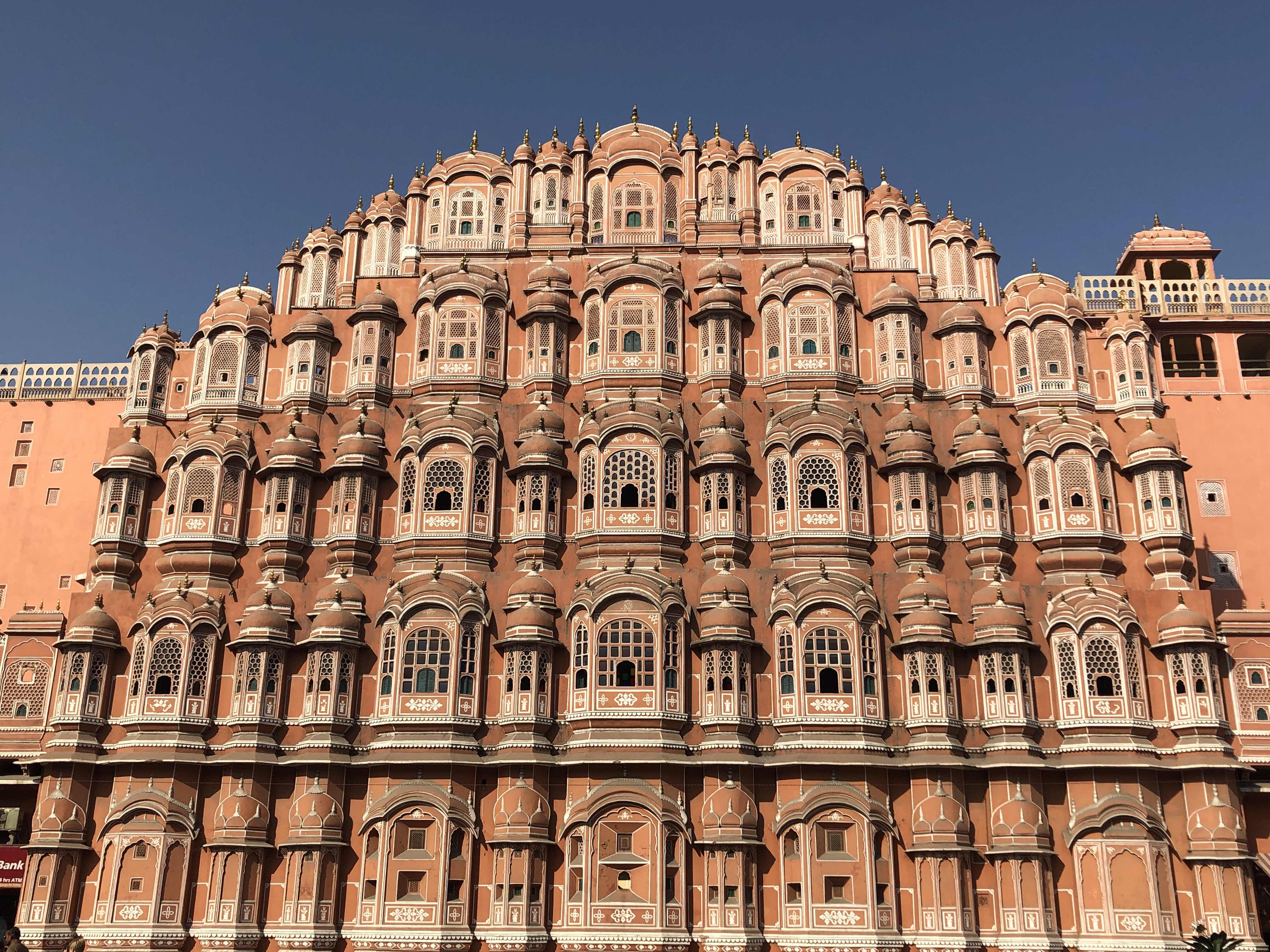 Today Stuart  and I exploded Jaipur  - the pink city.
Magnificent though it is, Jaipur was only built quite recently, in 1727. The then king Sawai Jai Singh had decided that his then capital city Amber was too small so wanted to build a new, bigger one. He started from scratch and chose a spot 11km away. So Jaipur was born. Only the king had a vision. A vision that involved the solar system. And a special number.
The new city was to be planned, built as a grid. He instructed the roads to be 108 feet wide, the side roads 54 feet wide, the narrow passages 27 feet wide. Why these widths? Well, try adding 1+8?, 5+4? 2+7? Yes, the king was obsessed with the number 9. Why? Well, he knew there were 9 planets (as was) in the solar system. He built 3x3 (yes 9) blocks in his new city too. And ordered the construction of the world’s largest astronomical clock in the Jantar Mantar observatory, next door.
The observatory had an epic sun dial to beat all others. It is huge. It is accurate to within 2 seconds. In addition, he constructed a dozen other structures which fix the position of the sun in each of the astrological signs. Astrology has always played an important part in Hindu life and is still used today before any business, political or marriage arrangement is undertaken.
A glittering palace was built in the new city too that to this day houses a textile museum, armoury and art gallery, with some stunning pictures showing the pageantry and pomp of life as an aristocrat.
Nearby The Hawa Mahal, or 'Palace of the Winds', was then built adjacent to the main road between the old and new capitals. The five storey structure was built in 1799 for the women of the royal entourage to observe the pageants passing along the streets below. The building is only one room deep and therefore only serves as a façade, rather than a palace.
In took 10 years but eventually the king’s solar system based city and its surrounding structures were eventually completed.
Fast foreword 150 years, and the king’s great grand son was now in charge. Tye British ruled India and in order to welcome the then Prince of Wales from the UK in 1876 he ordered the city to be painted pink.
So to this day, Sawai Jai Singh’s city is known at the pink city. And pink is still the main colour in town.
After checking out all the pink places, we did get to visit the original capital’s Amber Fort Palace too though. The cream coloured battlements there surmount a rugged ridge of the Aravalli hills, overlooking a large lake below. The fortress was built in the 16th century and comprises hundreds of now empty chambers, dungeons, servants' quarters, halls of private and public audience and delightful enclosed gardens with simple but charming water features. A labyrinth of passages connect the various sections of the palaces, leading you along raised passageways, through a glittering hall of silver mirrors and emerging into stunning belvederes. Near the entrance to the palace is a small temple devoted to the goddess Kali, with solid silver doors.
Sadly about fifty elephants are still used to transport tourists up to the Amber Palace from the town below. We looked on in horror as tourist after tourist mounted these magnificent beasts’ backs . Despicable practice.
So we left, and finished off our day by returning to Jaipur to take a ride through the city as nature had intended. By bicycle rickshaw. At least our cycle driver had a choice. A choice he chose to exercise - he made Stuart and I cycle part the way! 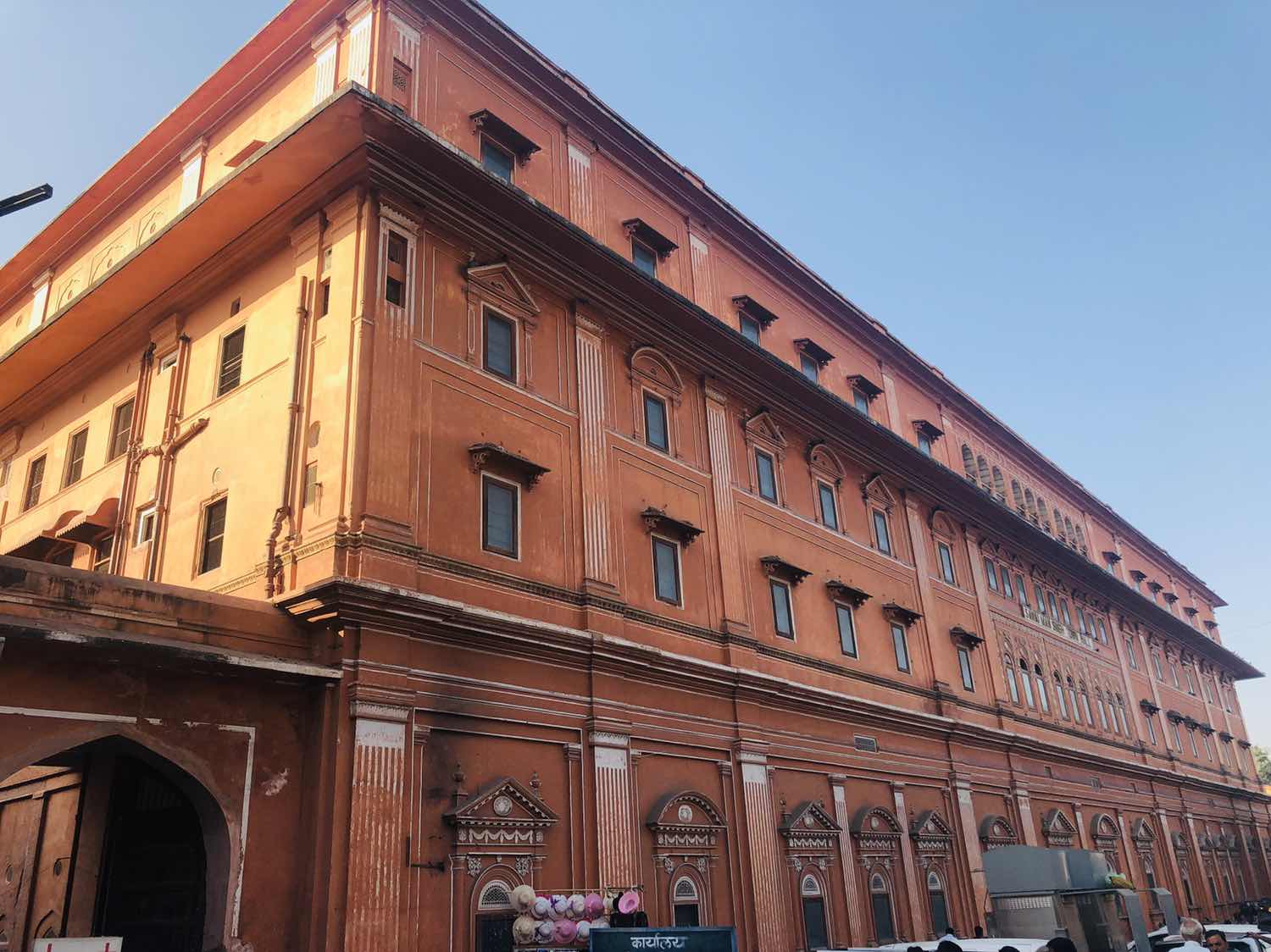 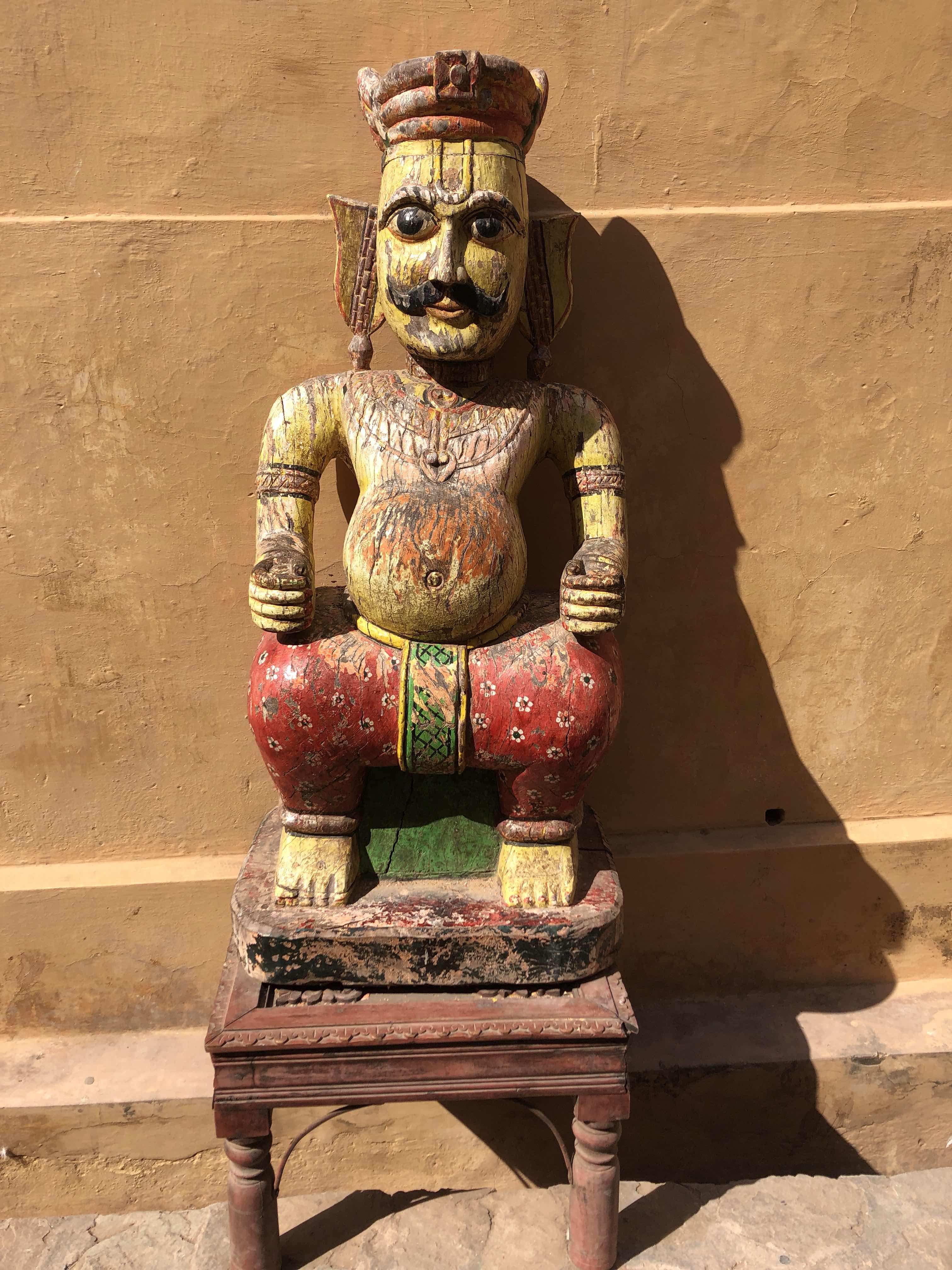 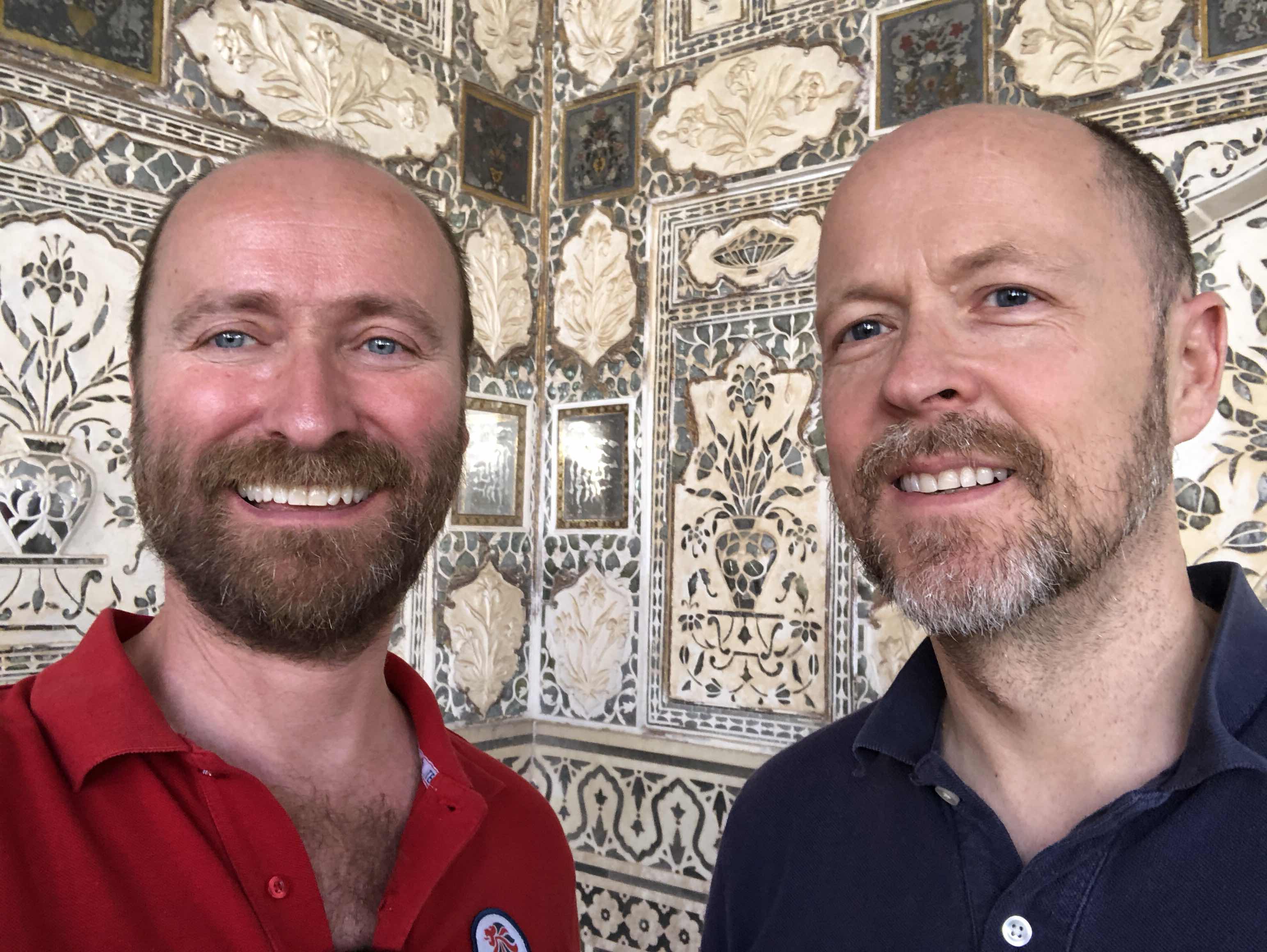 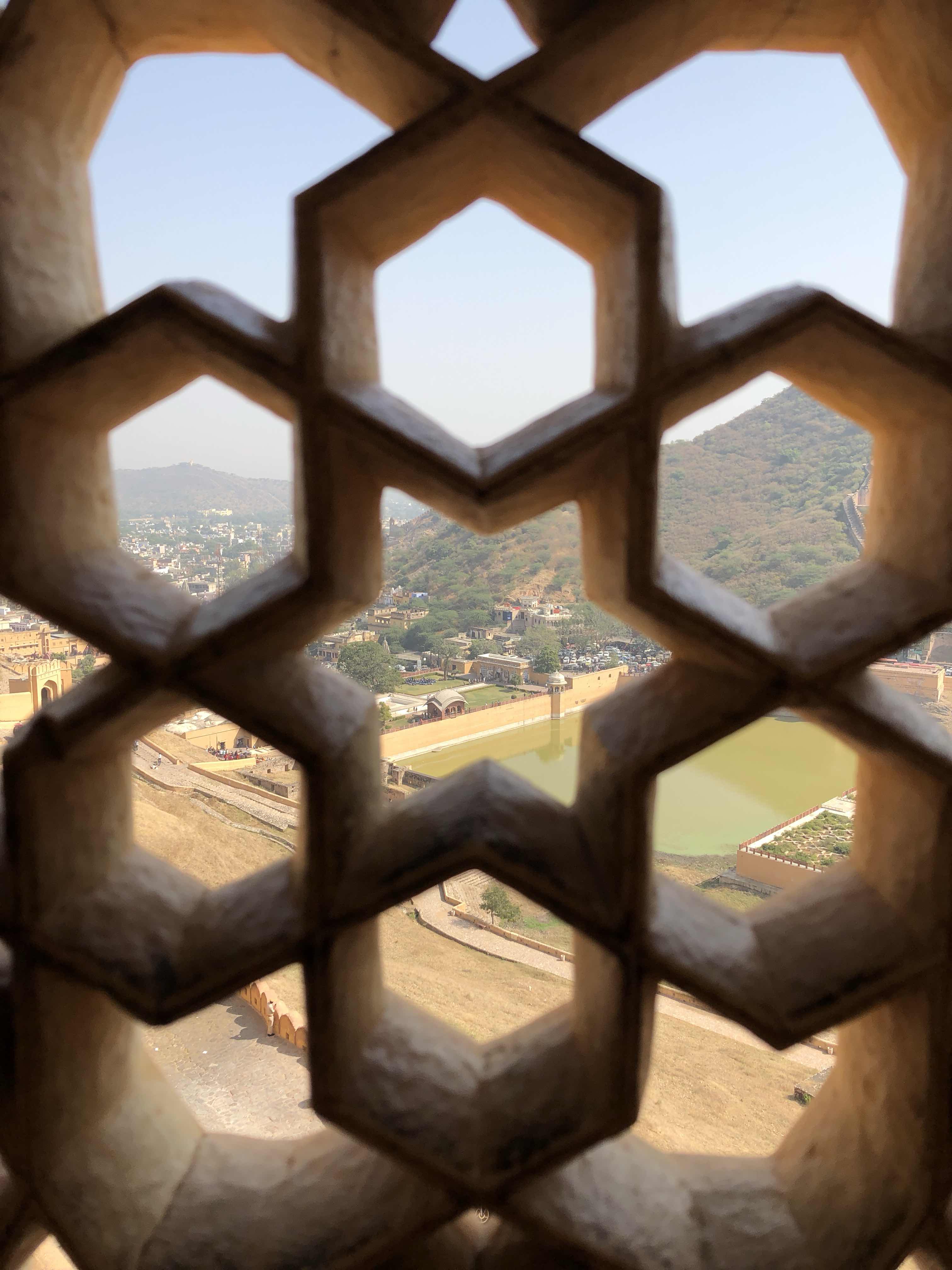 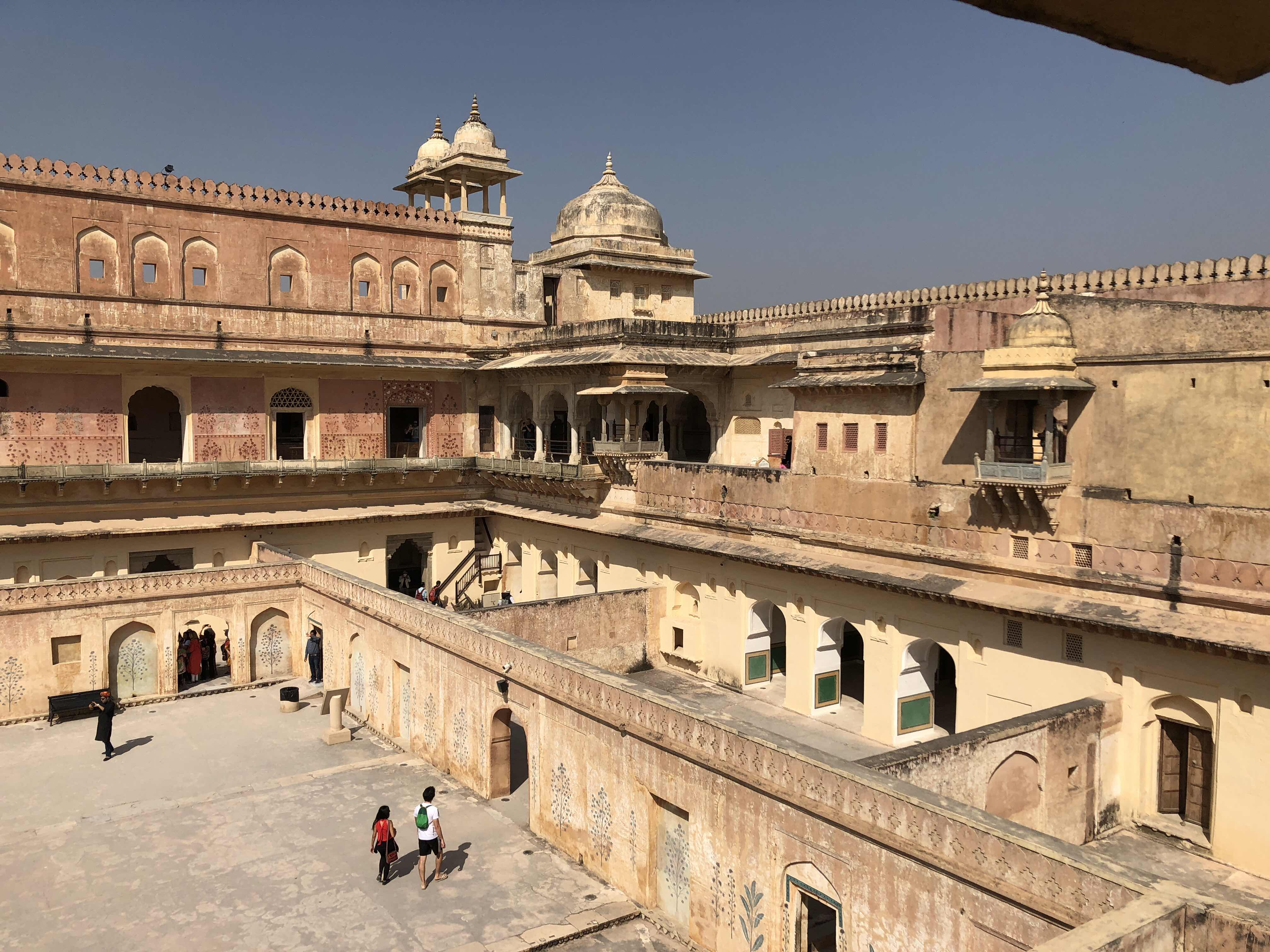 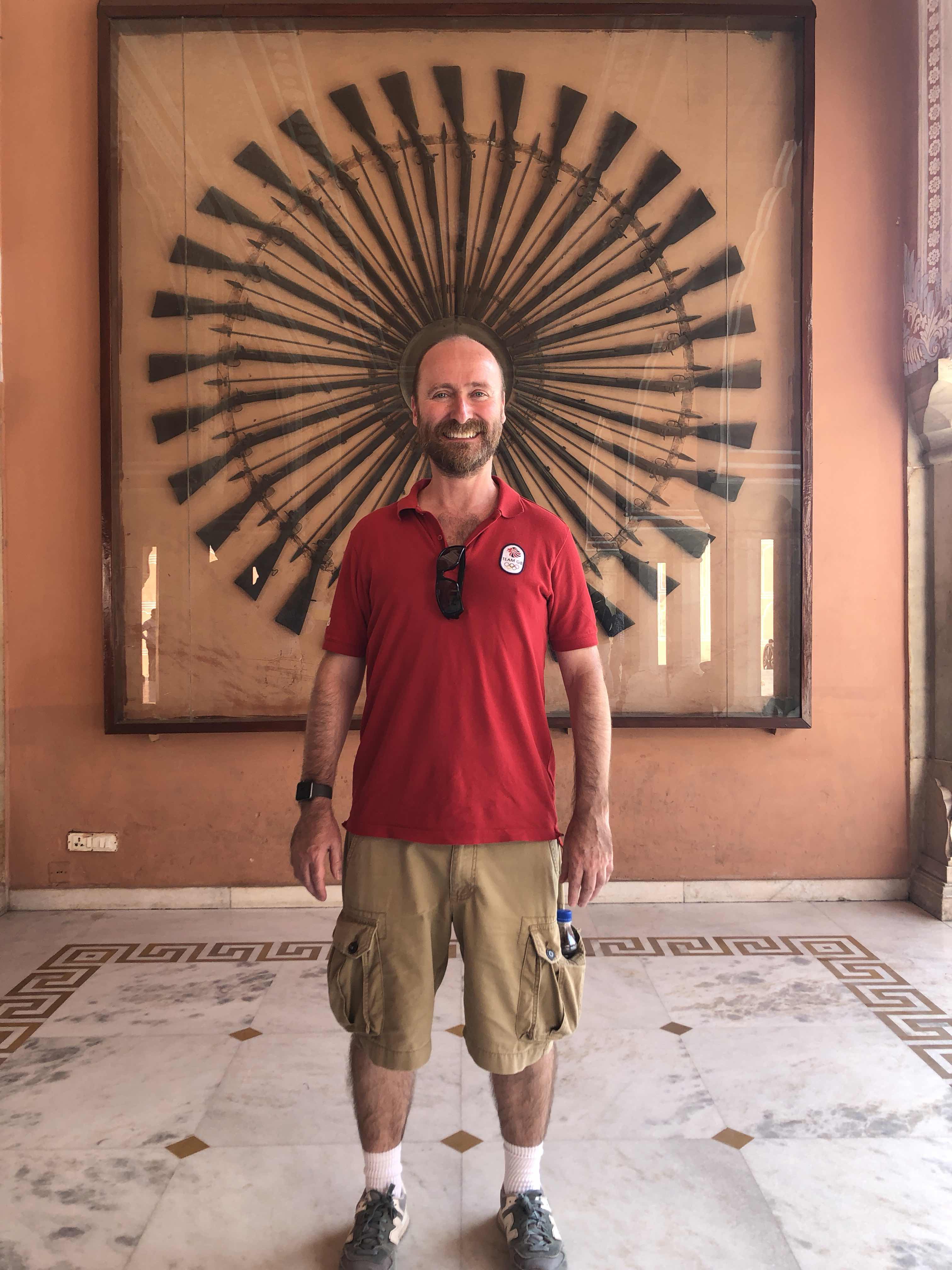 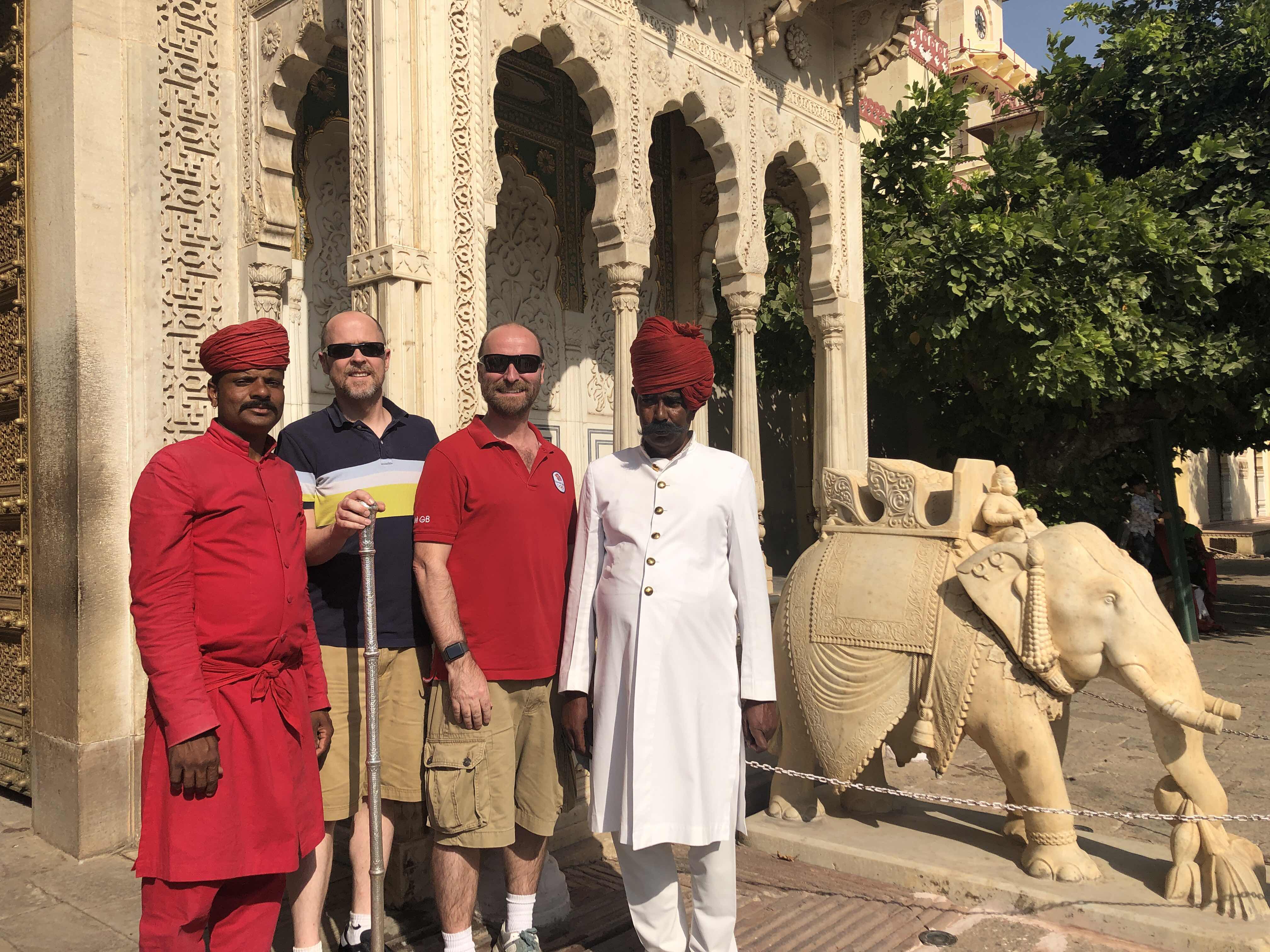 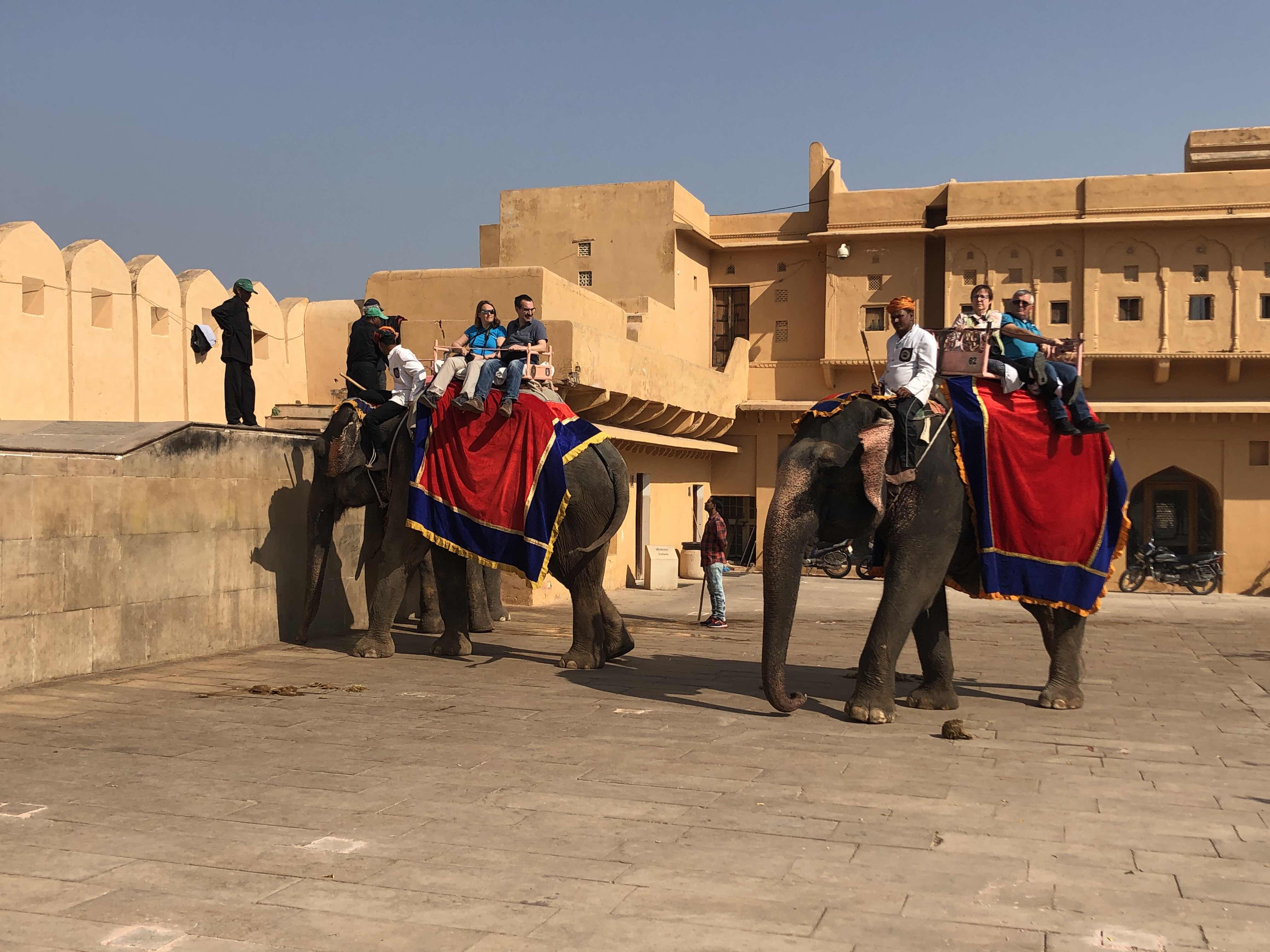 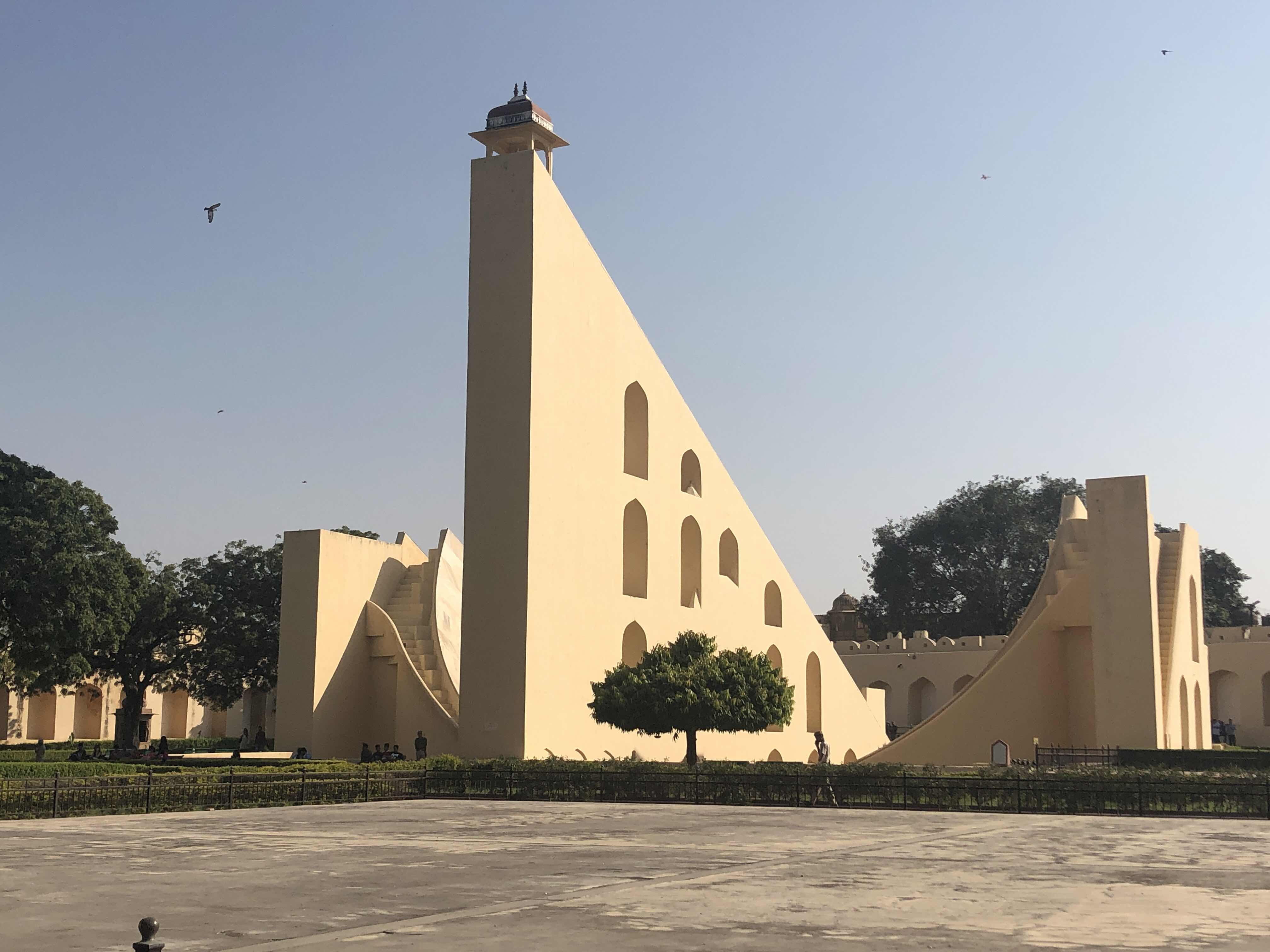 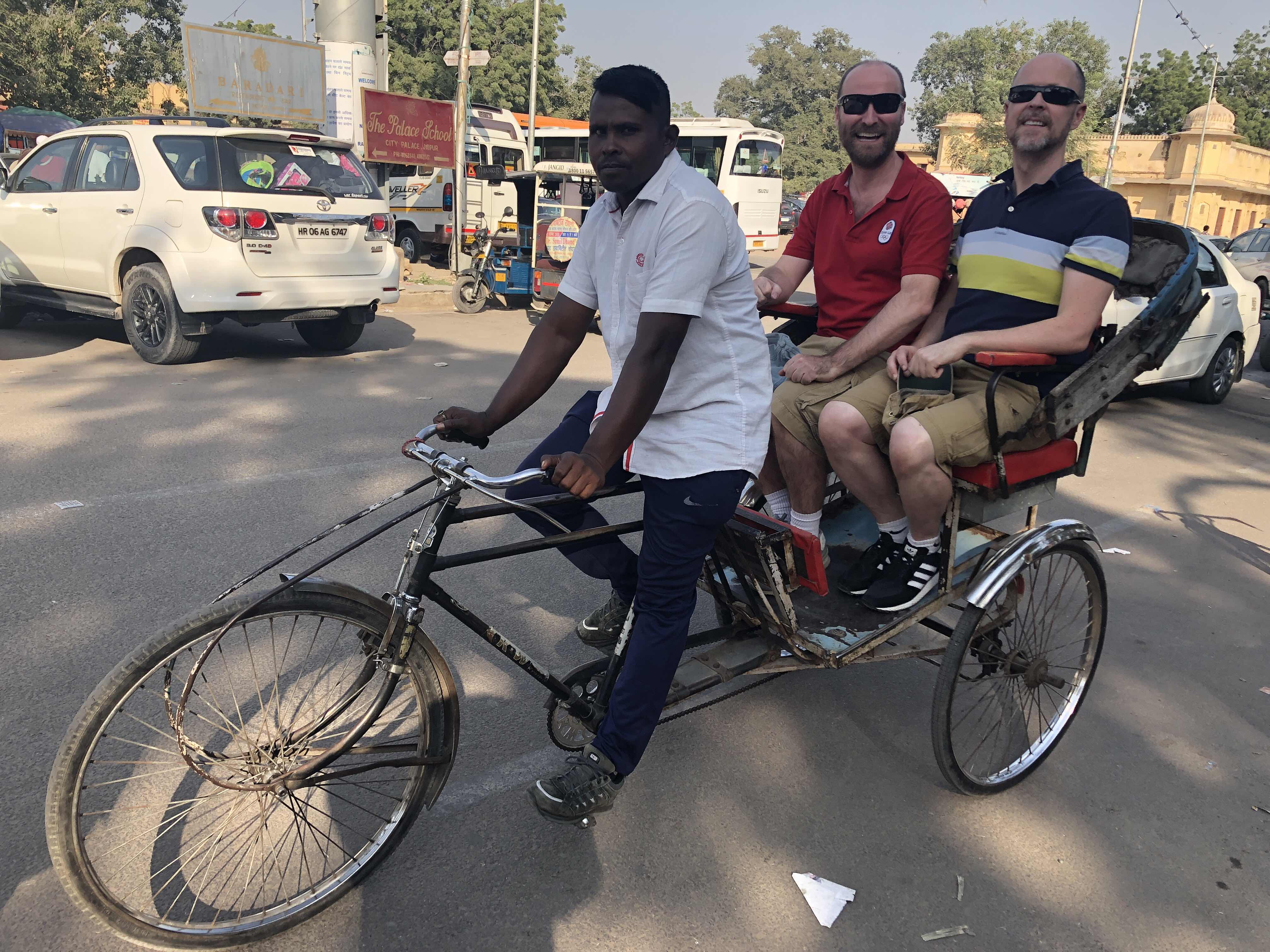 Posted by overyourhead at Saturday, November 10, 2018