Satyagraha: It was a fantastically hypnotic production. Jaw-droppingly wonderful in fact. In has to be in the top ten best things I've seen on stage. Ever. @openspacer @E_N_O #ENOSatyagraha ... 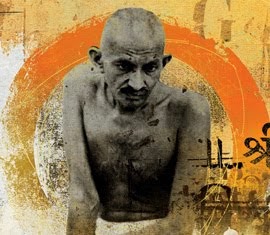 Last week Paul and I went to see Philip Glass's brilliant Satyagraha at the ENO in London's glitzy West End.

It was a fantastically hypnotic production. Jaw-droppingly wonderful in fact. In has to be in the top ten best things I've seen on stage. Ever.

The opera is in three acts for orchestra, chorus and soloists. Composed by Glass with libretto by Glass and Constance de Jong. It's loosely based on the life of Mohandas Gandhi. The term satyagraha is the philosophy and practice of nonviolent resistance developed by Gandhi himself.

Image after image is etched indelibly on the memory, in its masterly fusion of the aural and the visual. If you ever get a chance - go see.
Posted by overyourhead at Monday, March 05, 2018