On Monday night Stuart and I took a private members tour of the first major UK retrospective of the work of acclaimed German photographer Andreas Gursky at the newly reopened Hayward Gallery on London's glitzy South Bank.

Known for his large-scale, often spectacular pictures that portray emblematic sites and scenes of the global economy and contemporary life, Gursky is widely regarded as one of the most significant photographers of our time. He has a keen sense of humour too and the photographs are not only impressive but expressive too. You can’t help but smile when you seem them.

Driven by an interest and insight into the way that the world is constituted, as well as what he describes as "the pure joy of seeing", Gursky makes photographs that are not just depictions of places or situations, but reflections on the nature of image-making and the limits of human perception. Often taken from a high vantage point, these images make use of a democratic perspective that gives equal importance to all elements of his highly detailed scenes.

But are his images too good to be true? Well, yes, but then that's often the point. With digital manipulations these monumental pictures are magnificently orchestrated, gorgeous in their super-saturated colours – and improbably detailed. Gursky takes dozens - or even hundreds of photographs - of a scene, compiles, reconstitutes and then edits them to reveal an inner truth.

When Gursky’s picture of the Rhine as a band of silver light between parallel grass-green stripes became the most expensive photograph ever sold, in 2011, many people didn’t realise it had been digitally altered. Gursky straightened the river, removed dog walkers, trees and an entire power plant for the sake of abstract beauty, updating German Romanticism with his geometric sublime. But the photograph still partook of the reality it depicts; it is the Rhine, and yet it is not.

Other images at the exhibition - of jammed trading floors, hurtling highways, satellite images of Antarctica, corporate atriums, the Atlantic Ocean and industrial farms, mass tourism and skyscraper cities – have the same wow factor.

Three particularly caught our eye though. The expansive digitally enhanced departures board at Frankfurt airport, the epic Paris Montparnasse showing all 750 flats in the city’s largest apartment block, and the Amazon warehouse in Phoenix Arizona.

For Gursky people are ant-like against nature, the concrete city, globalisation. At a rave, they are just units of energy, turning this way and that in repetitive collage (an image that pretends to show a single moment, but self-evidently doesn’t). "I am never interested in the individual," he said, "but in the human species and its environment."

It you like photographic art - go see. It's great. 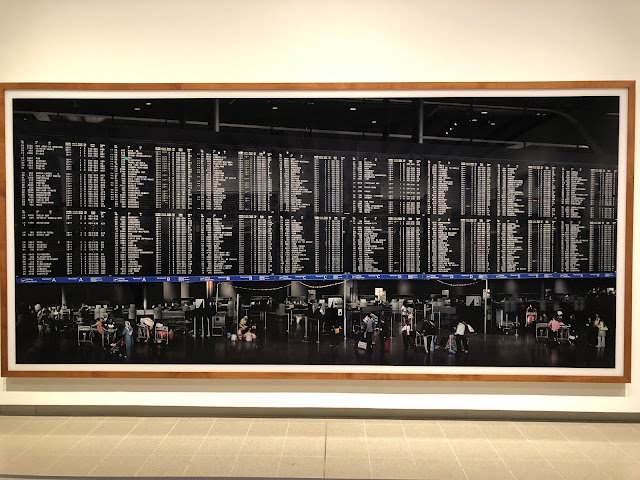 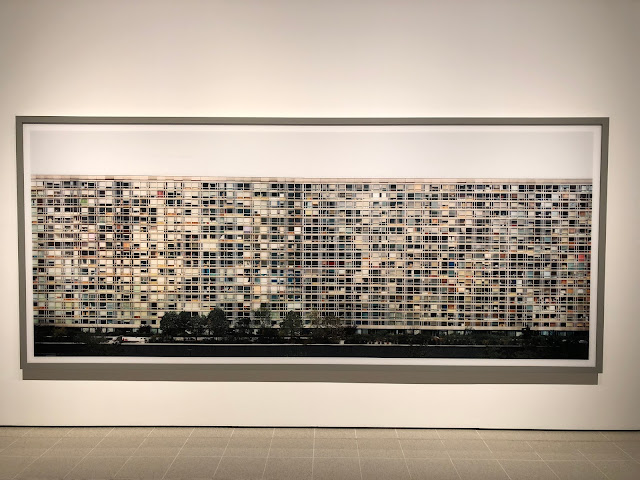 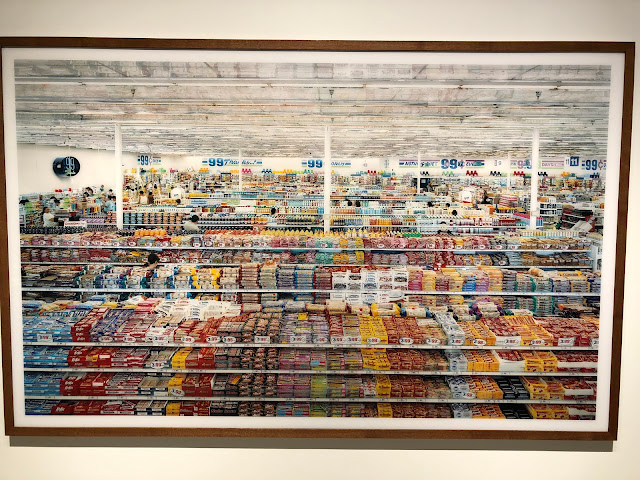 Posted by overyourhead at Wednesday, March 28, 2018