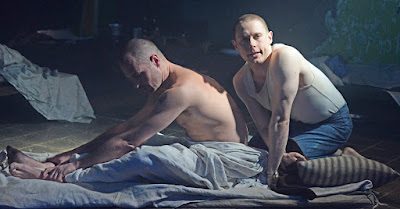 Last Friday night Stuart and I went to a new play adaptation of Manuel Puig's seminal novel Kiss of the Spider Woman at the Menier Chocolate Factory in London's glitzy London Bridge Quarter.

Writers José Rivera and Allan Baker along with director Laurie Sansom have done a great job of bringing this electrifying work to life.

Under an authoritarian regime, Molina (played by the wonderful Samuel Barnett) and Valentin (played by the remarkable Declan Bennett) are imprisoned in a small Argentinian jail cell in the mid-1970s. Despite their great differences, they start to depend on one another and a friendship develops.

Valentin is straight and Molina is gay and to pass the time the latter tells stories of dramatic Hollywood films to help them both 'escape' their confined space. The films are projected in silhouette on the walls of the auditorium as the twists and turns of the action mirror what is going on inside the cell.

Powerful, lyrical and compelling, Kiss of the Spider Woman examines friendship on many levels as both characters struggle with the uncertainties of truth and falsehood, friendship and betrayal, against a background of cruelty, torture and disappearances.

Samuel Barnett's Molina is on the surface funny and camp, but hides a sadness and a dark secret. Ultimately his plight becomes both moving and redemptive.

Declan Bennett's Valentin is brutish, political and passionate. He learns to suffer - both physical torture and the battle his own emotions.