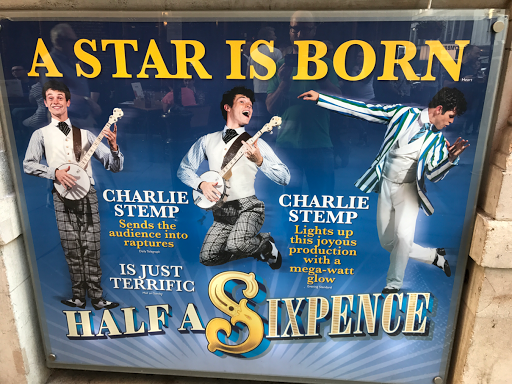 Last night Roger and I went to see rags-to-riches-to-rags-to-riches again musical Half A Sixpence at the Noel Coward Theatre in London's glitzy West End.

Synopsis: Perky show. Strong cast. Like the lead’s trousers though - rather weak material.

Originally a star-vehicle for Tommy Steele this revival has been marvellously conceived by writer Julian Fellowes with a slick production, a wonderful cast, even if a few of the songs were perhaps - how can I put this? - rather less memorable than some of the others.

That said, when the songs were weak these boys and girls stepped up to the plate and certainly knew how to make a little go a very long way.

The source material is HG Wells’s 1905 novel Kipps what tells the story of a cockney draper Arthur (played by the outstanding Charlie Stemp) who strikes it rich, dallies with the toffs, gets swindled out of this money, goes back to his childhood sweetheart and then strikes it lucky all over again.

Let's not look too deeply into the subtext of the piece - well, ok, just for a bit - but whereas some might think of this as a "We were poor, but we were happy" or "Money can't buy you happiness" tale in fact it's told closer to a "Oi! Poor people! Know your limits!" fable.

The poor are severely downtrodden and only dream of one thing - money. And if they get it they can never be accepted in high society. The poor women in particular only seem to want a husband, a baby or both. Fellowes seems to acknowledge this one-dimensional portrayal of the masses and introduces a socialist (but who soon takes the money) and 'gives' him a Suffragette girlfriend (but to whom he gives no lines and marries her off quick sticks.) Oh, well. It is just a musical!

Talking of which, if the first-half was just OK, the second-half really picks up as it includes a show-stopper called Pick Out a Simple Tune, which starts with a rudimentary plucking at a banjo and gathers into an almost orgiastic cockney knees-up, engulfing stiff sophisticates at a Folkestone soirée.

And to crown the night off we were treated to an eight minute all-singing, all-dancing, jazz hands, table thumping, version of Flash Bang Wallop (What a Picture!) which was worth the ticket price alone.

Good to see the show reinvented from its 1960s roots but I think it might need a bit more work to be the outstanding show the excellent cast really deserve.