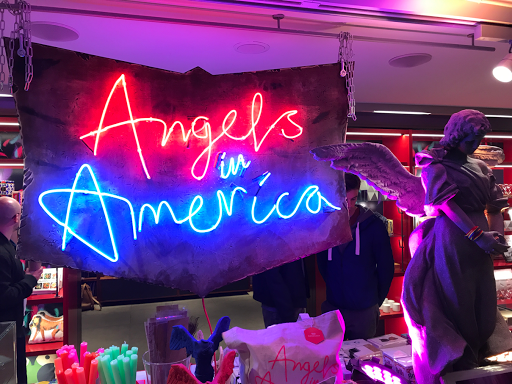 Last Saturday Stuart and I went to see both Angels in America plays back to back at the National Theatre on London's glitzy South Bank.

Synopsis: A simply outstanding production. There is blood, tears, laughs aplenty, Russell Tovey getting his kit off, and we see lesbian sex with an Angel. What's not to like?

An epic eight-hour duo of plays featuring more than 30 characters, from travel agents and lawyers to divine emanations and bisexual Mormons, Angels in America is unique.

It creates a world where illness and sexuality are unapologetic and political diatribes sit alongside angelic visions.

It is also very, very funny.

Prior Walter (a sublime Andrew Garfield) is one of these unfortunate souls but who has a rather fabulous journey to make before he meets his maker.

A second Joe Pitt (hunky Russell Tovey) is a bisexual Moron whose wife (Denise Gough) has her own illusionary world to explore.

A third man Roy Cohn (outrageous Nathan Lane) is a real-life vicious closeted lawyer who knows the cost of everything but the value of nothing.

Tragedy strikes each of them, but not before a world of fantasy touches them all.

All the cast are excellent but especially Nathan Stewart-Jarrett as the nurse Belize.