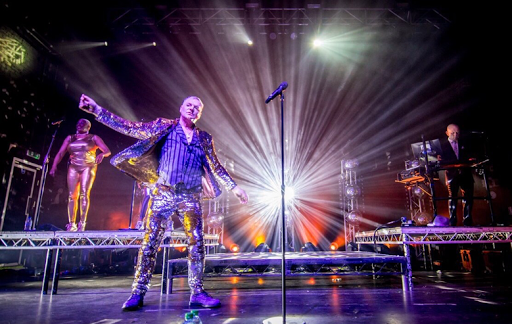 Last night Stuart, Ange and I (along with the world and his husband) went to see the magnificent Erasure perform at The Roundhouse in London's none too glitzy Chalk Farm.

Ostensibly to promote their new album World Be Gone the marvellous duo of Andy Bell and Vince Clark put on a great show, as ever, for a very enthustiatic crowd.

Andy bounded on to the stage dressed in a broad-brimmed hat, glitter ball top and trousers while Vince wore a blue suit.

For the next 1 hour 45 minutes we were treated to all the hits - with one notable exception - along with some fan-voted favourites and five tracks from said new self-produced album.

World Be Gone is Erasure's 17th album and is quite a change of direction. Gone is their sugary pop and uplifting songs of love and hate replaced by a voice of remonstration and discontent. The

songs are a lot more sombre taking on topics that blur the lines between pop and politics. None demonstrates this more adult theme than the beautiful protest song “Still It’s Not Over” - a

lament on HIV/AIDS. Although the new songs are mostly melodic, they are slower and painfully vulnerable and perhaps not suited to a largely standing venue when people really just wanted to

dance, dance, dance baby.  Heart-felt though the performances were of these more thoughtful songs when they came on people were all too often seen running to the bar or the loo.

But then when a high-tempo hit came on to follow it the place erupted again in a sea of cheers, dancing and singing. And the hits kept on coming. It was perhaps the biggest kareoke venue in

Even as the last notes of A Little Respect died away the crowd kept singing it all the way out of the venue, along the street and down onto the Northern Line.

And the notable exception that was missed out from the show? Due to the extra security on the door following the terrible Manchester bombing last Monday getting people in to the Roundhouse was

a very slow affair. With Erasure due to start at 9pm, at 8:50pm there were still over 500 people queuing to get in. Eventually the venue gave on the addition security checks and just let people

flood in. But despite this the gig still started a little over 10 minutes late so something had to go from the set list and sadly is was one of my favourites - Ship of Fools - along with one of

the new tracks A Bitter Parting.

Which left the full set-list as

Breath of Life
Drama!
It Doesn't Have to Be
Love You to the Sky
Oh L'Amour
Chorus
Oh What a World
Just a Little Love
Blue Savannah
In My Arms
Sweet Summer Loving
Knocking on Your Door
Love to Hate You
Sometimes
Still It's Not Over
Phantom Bride
Here I Go Impossible Again
Stop!
Always
World Be Gone
Lousy Sum of Nothing
Take Me Out of Myself

Encore
Chains of Love
Victim of Love
A Little Respect 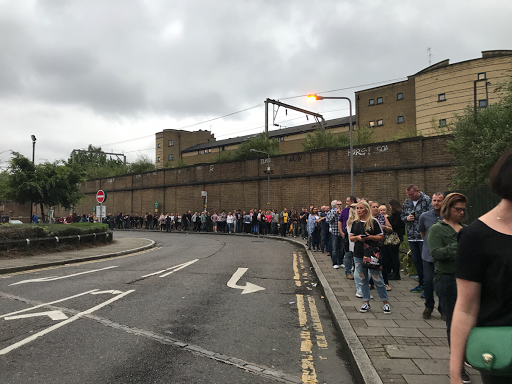