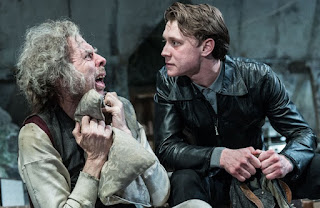 Last Friday night Stuart and I went to see Matthew Warchus's production of The Caretaker at the Old Vic Theatre in London's getting-a-bit-more glitzy Waterloo.

Now Harold Pinter plays are not to every one's taste. Not least because the... long... pauses... can... drive... some... people... nuts. Aaand... eeeven... seeeend... theeem... tooo... sleeeep. And what with this production clocking in at 3 hours 10 minutes coupled with the notoriously warm Old Vic auditorium this was an evening that might challenge even the most ardent of Pinter fans to stay alert throughout. That is if the performances hadn't been quite so electrifying.

In the course of the action, Davies meets and is befriended by the kindly Aston (Daniel Mays) but brutally exposed as an artful dodger by Aston’s leather-jacketed brother, Mick (George MacKay).

The three performances were all excellent, full of menace, very funny and at times heart-breaking. Daniel Mays speech about with violent electro-therapy is especially moving.

So (with a strong cup of coffee at interval number two) highly recommend.
Posted by overyourhead at Tuesday, May 17, 2016