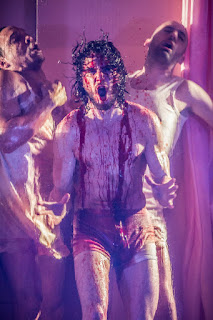 Last Thursday night Stuart and I went to see the gorgeous Kit Harington in Christopher Marlowe's Doctor Faustus at the Duke of York's Theatre in London's glitzy West End.

The story tells of Doctor F selling his soul to the devil, writing the contract in blood and then living for the next 24 years as a Las Vegas magician. No really. They rewrote the middle bit.

To call this thing a mess would be to down play the word 'mess'. It is vulgar, chaotic, visceral, offensive, stupid, popularist, funny, rude, sacrilegious, ridiculous, and at times plain crap. People walked out at the interval. Which was a shame as they missed the on-stage karaoke.

We were treated to two and half hours of impenetrable dialogue, full frontal male and female nudity, rape, a dancing chorus line of devils, and blood. Lots and lots of blood.

It really was a mess.

On the up side we got to see lots and lots of Kit Harington. And nice to hear Kylie Minogue's Better the Devil You Know and Meatloaf's Bat Out of Hell sung at the interval.

Hard to recommend. Unless you like things really, really messy.
Posted by overyourhead at Monday, May 09, 2016