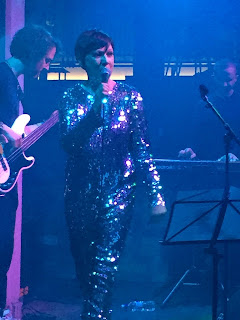 We started the night at The Hen and Chickens meeting with Tim and Andy for a beer or three where we also bumped into Mark and Jane and Sarah which was nice. We then headed over to Camden Town for some nosh, knowing as we did that Billie wouldn't be on stage on time. And we were right - 45 minutes late. But it was worth it. Ostensibly promoting her new album The Soul Tapes we were treated to Billie's hits old and new.

Billie has never been easy to categorise. Clearly a soul singer, her career however has seen her mostly as a pioneer of house and electronic music, most notably her ground-breaking work with Electribe 101 and her seminal hit Your Loving Arms. Her explorations have led her further into the worlds of ambient music and drum & bass among other areas of electronica.

Her 2001 album 18 Carat Garbage had found her in Memphis, recording with Al Green’s and Aretha Franklin’s musicians, then adding cutting edge electronic sounds and textures to the production once back in Hamburg. The album was released in Germany, and on UK import sold several thousand copies in the first week of release alone. This current work continues that journey.

The Soul Tapes is the natural conclusion and a ‘first’ for Billie: no electronic music this time. Billie realised her long-held dream of recording an album that is equally influenced by Hi-Records (Al Green, Ann Peebles, Willie Mitchell) as it is by ’60s garage records. It is also not devoid of a certain country twang, and even Bo Diddley peeks through the door on one song.

So there we were at the Jazz Cafe appreciating Billie's soulful voice and her journey through all things soul and rhythm & blues. But nothing quite compared to the reception that greeted Your Loving Arms or Talking With Myself.

Afterwards Darren and I danced the night away at the Bloc Bar crawling in at some un-Godly hour.