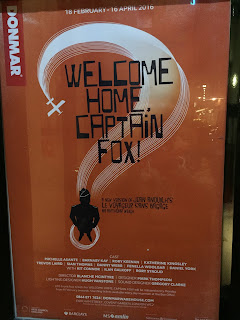 Set in 1959 this is a loving homage to the golden era of the American comedy. But this particular nugget of gold doesn't so much brightly shine as mildly shimmer.

Captain Jack Fox, believed missing in action in the fields of France 15 years before, is about to be reunited with his family in The Hamptons. But is this really Jack Fox? And if it isn’t, who is this man? And why are there 22 other families so intent on claiming him as their own? And do we really care?

As a rather limp imitation of Oscar Wilde's The Importance of Being Earnest this has been produced as a fairly shallow piece of theatre. That said, there are some laughs to be had - not least after the consumption of a few glasses of wine and usually at the expense of the play's own Mrs Malapropism (Mrs Marcee Dupont-Dufort) played by Katherine Kingsley. “You do say the ‘t’!”

Welcome Home, Captain Fox! is downright silly and perhaps lost any biting social satire in it's free adaptation from the more complicated French source play Le Voyageur. A brave effort, well cast but not as funny as it should be.
Posted by overyourhead at Monday, March 07, 2016