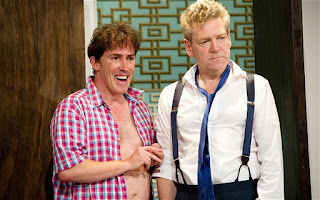 Last night Stuart and I went to see The Painkiller at The Garrick theatre in London's glitzy West End.

The star voltage of Kenneth Branagh and Rob Brydon is the essential ingredient in Sean Foley's adaptation of a French farce Le Contrat by Francis Veber. Best known as the author of Le Diner de Cons, Veber specialises in creating double acts, and here two very different men in adjoining hotel bedrooms become unlikely buddies. Brydon is the "one-man natural disaster zone" Dudley, a failed photographer from Swindon who is determined to kill himself because his wife has left him for her psychiatrist. Branagh's svelte hitman Ralph has no need of anyone or anything other than an elegant suit and his rifle. When Dudley insists on involving him in his personal problems, Ralph's indifferent veneer is dented despite himself. The two begin to swap personalities, even exchanging clothes under the pressure of circumstances.

While the plot setup is cumbersome, it builds to a choreographed sequence of mistaken identities, confusion and pure slapstick, culminating in the injection of horse tranquilliser G by the psychiatrist Dent (Alex Macqueen) that transforms Ralph into a jelly-legged contortionist. Branagh staggers and spins across the stage with the ease of a rubber doll, and one with impeccable comic timing. Mind you I've seen enough people on G tp know that Branagh hadn't.

Into the mix come a policeman (Marcus Fraser) who ends up in the wardrobe before being kicked around by Ralph, then Dudley's wife Michelle (Claudie Blakley), who is beginning to have second thoughts about her hapless husband. All are observed by the mincing hotel porter, played by Mark Hadfield, whose eyebrows raise an inch higher each time he happens upon the tussling men in increasingly compromising clinches on the bed.

"This man has got loser written all over his face," says Macqueen pointing at Branagh, and it brings the house down. But gags about Ralph's thin lips and Dudley's penchant for singing Chris de Burgh's Lady in Red to his unresponsive wife are not quite sharp enough. At times the script has the dated feel of a 1970s sitcom. The physical comedy is the point, of course, and director Sean Foley delivers it unstintingly. Branagh and Foley, who are co-producers here, have collaborated successfully before on The Play What I Wrote, but it is hard not to wonder whether Brydon should have been enlisted as a co-writer and given himself some funnier lines.

Not really recommended. Unless you find French farces with people-dropping-their-trousers-for-no-reason-at-all funny. Which I do - but only when I'm drunk - which I wasn't.
Posted by overyourhead at Tuesday, March 08, 2016