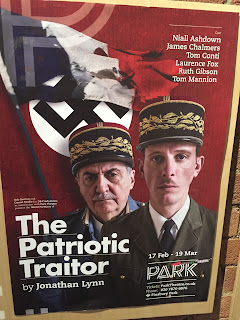 Last Friday night Stuart and I went to see Jonathan Lynn's The Patriotic Traitor at the Park Theatre in London's unglitzy Finsbury Park.

The action charts the friendship-turned-enmity between Tom Conti's Philippe Pétain – the French general and hero of Verdun, who would go on to sign the infamous armistice with Nazi Germany – and Laurence Fox's ambitious Charles de Gaulle, the soldier who would rescue France and have Pétain tried for treason. It's old warfare versus modern warfare. Patriot vs Traitor. And it's a fascinating story.

The acting was top-notch and we were gripped from start to finish.

One person’s patriot is someone else’s traitor, and it’s ultimately circumstance, time and history that decides whose view wins.
Posted by overyourhead at Monday, March 21, 2016