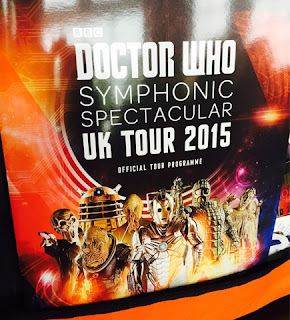 Last Saturday night Stuart treated me to a night seeing the Doctor Who Symphonic Spectacular at Wembley Arena.

The evening featured Murray Gold's music from the hit series performed by the BBC National Orchestra of Wales and the Chorus of Wales conducted by Ben Foster. The music was accompanied by giant screens showing montages from the show, Cybermen, Daleks, The Silence, hideously emaciated mummies prowling the aisles and Peter Davidson hosting. 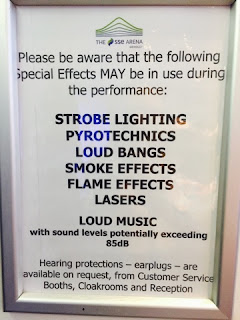 Also in attendance was showrunner Steven Moffat and Murray himself.

As Doctor number five Peter Davidson made many a joke about if his abilities as host weren't up to scratch his contract would be (ex)terminated he be replaced by Colin Baker (Doctor number six). Ho ho.

The show was great fun. The music fantastic with notable pieces the wondrous I Am The Doctor, The Impossible Girl (Clara’s theme), Abigail’s Song, Last Christmas Suite, Wherever Whenever and the thunderous Pandorica Suite.

One for the fans - but who isn't a fan on Doctor Who?