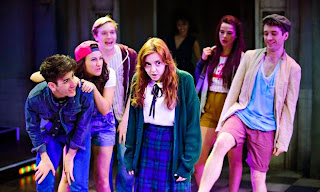 Last night David, Dean, Stuart and I went to see Carrie: The Musical at the Southwark Playhouse in London's rather er... unglitzy Elephant and Castle.

Based on the Stephen King schlock-horror story and with a book by Lawrence D. Cohen, lyrics by Dean Pitchford, and music by Michael Gore (sic) this musical was royally panned when it was first staged in Stratford-upon-Avon in 1988. When it transferred to New York later that year the audience was heard to boo and it closed just 5 performances after previews losing nearly all of it's $8m investment. Some critics described it as the worse show they had even seen.

So here we are 27 years later with a brand new slimmed down production. And you know what?  It is actually really rather good.

In a nutshell Carrie tells the story of a teenage girl, bullied by her classmates and fanatically religious mother, who develops telekinetic powers. 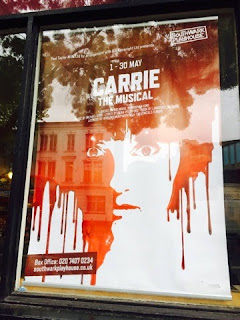 Evelyn Hoskins as Carrie impressively charts the path from vulnerability to insane rage. She transforms first from cowering teenager to delicate young woman, as she blossoms briefly for the school prom, then to deranged killer when her more vicious classmates humiliate her. There is lovely support from Sarah McNicholas as her classmate Sue, smitten with conscience, and from Greg Miller-Burns as Sue’s nice-guy boyfriend, Tommy.
Meanwhile Kim Criswell is simply sensational as Carrie’s mad mother Margaret, her hair-raising solos conveying the personal pain behind her crazed religious mind set. In numbers such as Remember How Those Boys Could Dance, Criswell’s voice is powerful but perfectly controlled, conveying all the warped tenderness and menace which Margaret needs. If you’re going to watch a deranged religious mother drag her daughter round the stage while singing at top volume, this is definitely the show for you!

The young ensemble do a cracking job, going full-throttle on the melodrama while keeping the focus tight. This is High School Musical meets Last House On The Left. This is Glee meets Saw. Sure the cast send to sing AT each other rather than WITH each other at times and the songs aren't particularly memorable but it's a great ride. Funny too.