A Mad World My Masters... 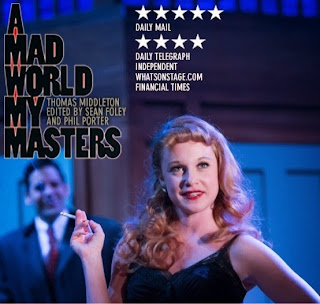 Last week Stuart and I went to see A Mad World My Masters at the Barbican Theatre in London's glitzy Barbican Centre.

In the same vane as the National’s triumphant One Man, Two Guvnors this Jacobean comedy plays it was laughs - and crude laughs at that.

Transported to the seedy surroundings of 1950s Soho, Thomas Middleton’s wickedly funny comedy sees our hero Richard Follywit variously become a lord, a high-class call girl and – God forbid – a poor actor. But beautiful Soho tart, Miss Truly Kidman, is also on the scam: a whore to some, a religious instructor to others, and a debutante in need of an eligible bachelor to yet more.

In this mad, boisterous world, glamour rubs up against filth, and likes it; the posh mix with musicians, prostitutes and racketeers; and a dashing bachelor in need of quick cash is forced to live on his wits. Things are very bawdy here and the uproarious tale of deceits and disguises is played for the broadest of laughs. Joe Orton would have approved.

At times the persistent use of innuendo makes you feel you’re watching a Carry-On film. The conniving Dick Follywit tells us he is a man of “considerable endowment”. “Here’s the cock coming to bone the chicken,” declares the easily duped landowner Sir Bounteous Deersucker. The gags just keep on coming. Missus.

Great fun though.
Posted by overyourhead at Monday, May 11, 2015