The Lamb Lies Down On Broadway - The Musical Box… 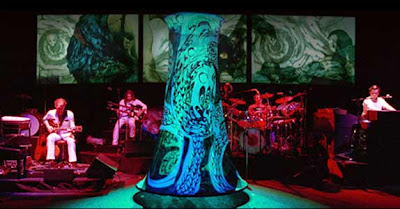 Much as I love the 3 minute pop song and the 8 minute disco 12" on Saturday night Paul and I was indulging another musical love - the concept album. And not just any old concept album mind you - the 2nd best concept album of all time - the prog rock classic The Lamb Lies Down On Broadway. Genesis's 1974 classic was getting recreated by tribute band The Musical Box as the live (and truly bonkers) stage show.

The show had been painstaking researched to be a note for note duplicate of the original 100 date world tour that Peter Gabriel fronted before he left the band (and Phil Collin's went on to ruin it.). The music, vocal work, choreography, OTT staging, wild lighting, and Doctor Who-like monstrous costumes were all perfect and loving duplicates. We last saw this show in 2005 and this, their final performance of it, matched that performance for sheer exuberance alone.

The show has actually been endorsed by Gabriel himself, Phil Collins, Tony Banks, Steve Hackett and Mike Rutherford. Which says something for it's authenticity.

We came out singing Carpet Crawlers and The Grand Parade of Lifeless Packaging.

Oh, and the best concept album of all time? Kate Bush's Hounds of Love of course.

Oh and the 3rd best? Pink Floyd's The Wall of course.