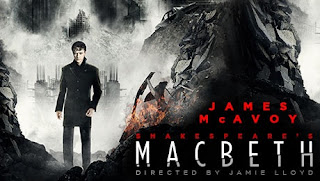 Last night Stu and I went to see James McAvoy play Macbeth at the Trafalgar Studios in the London's glitzy West End.

This particular version of 'the Scottish play' was resolutely Scottish with accents as thick as Nessie's rump. Not that that was in any way a bad thing but when coupled along with the rather dated post-apocalyptic grunge look of the set it came across more low-life Glasgow estate than Highland Royal Estate. Jamie Lloyd’s production has Scotland as a place of broken windows, filthy people and foul toilets. Feel free to add your own joke at this point but I think I can perhaps rise above such cheap insults here.

James McAvoy's Macbeth is buffed, handsome, and charismatic. A Hollywood actor with twinkly eyes to match. But sadly all the slickly choreographed sword fighting, bearlike roaring, excessive spitting and needless vomiting in the world couldn't convince me he was the brave Scottish warrior of old. Braveheart he was not.

Macbeth's slow descent into madness following his bloody regicide is often a gripping part of the play to witness. Sadly in the hands of Mr McAvoy it was handled with the care of flicking on a light switch. One moment he was nervous, shy and loyal. The next he was screaming down the house, chewing up the scenery and spitting out anything he could put in his mouth.

Lady Macbeth was not much better. Why, she barely seemed to be sorry for what she has done. Her suicide almost came as a surprise.

Other cast members faired better (the Porter, Malcom's son and Macduff's wife being particularly good examples) but the excessive use of Kensington Gore and the flashing overhead lights to signal menace gave the whole production the feel of a well funded college production.

Post review Update: OK, it wasn't terrible - it's just been done so much better recently. Older incarnation of Charles Xavier Patrick Stewart's recent version being an outstanding example. Well, on the up side there are a few cute supporting cast members to keep an eye on. Sadly lots of X Men fans were in the house - some taking photos and videos during the performance! Shameful.