The Curious Incident of the Dog in the Night-time... 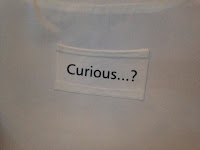 On Friday Stuart and I went to see The Curious Incident of the Dog in the Night-time at the Apollo Theatre in London's glitzy West End.

If it was to be half as good as Mark Haddon's book we were in for a treat. It was, we were. The show was magnificent - clever, moving and fun. The set sparkled with as much light as the script did with wit. Luke Treadaway as lead protagonist Christopher has excellent.

The apparently simple black cubic set hid a pretty sophisticated secret. A grid spanned each wall and the floor which when lit up, shimmered and told stories in it's own right. Finn Ross's videos were projected on it and the Paule Constable's marvellous lighting within it all helped propelled the plot forward.

The story is a murder mystery. The victim is a dog Wellington and the sleuth a boy Christopher who against his father's wishes wants to find out who killed him. Christopher has a mathematical gift and "behavioural problems" so when confronted with the illogical actions can't work out what to do next. "You told me to be quiet but not for how long" complains Christopher to his father. He lives in a world of the literal. Expressions like 'apple of your eye', 'fed up to the back teeth' and 'end of my tether' just serve to confuse and frustrate. It really shows just how much of common sense relies upon logic. He cannot lie - but when others seem to he is lost.

The plot contains many twists and turns but eventually all is revealed and justice done.

In a nod to meta-theatre there are puzzles in the theatre programme - why do some of the seats have white covers on them? And for the patient a post-show explanation is on hand for one of the pivotal mathematical problems. It was a great night out and strongly recommended. 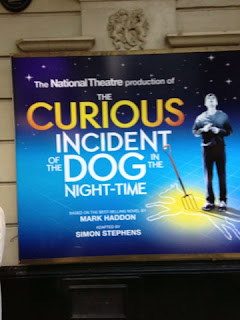 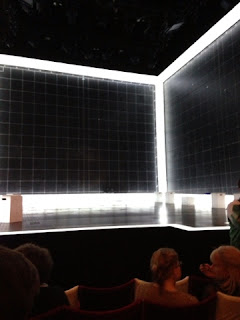