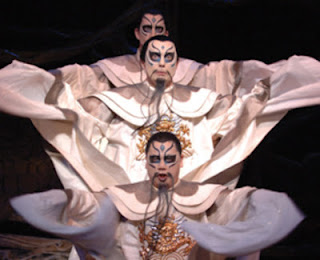 It was raining in Sydney yesterday - Ok, apparently it's been raining in Sydney all summer so no change there then - so Stuart and I decided to do something a little bit cultural. Yeah, I know what you're thinking. Sydney? Culture? But there's a hell of a lot of things to do round here. You'd be surprised. So, a museum maybe? A gallery? Hmmm. I know, let's go on the Sydney Opera House Tour. Have a smooze round the old bit of weirdness and see what's inside. Only ever seen it from the outside before. We can see the place right out of the window of where we are staying.

David and Andrew have very kindly been hosting us in their lovely Darlinghurst apartment. We are late risers and having house-guests lying around all over your home is at least an inconvenience so we thank them muchly for their hospitality. Their view of the Opera House had planted the seed though.

Just before setting out we checked with Trip Advisor though to see if there were any gotchas we should be aware of. Always the wary one me. Although most of the reviews were great a couple of people suggested that rather than peering in through the windows as it were we actually saved on the tour cost and put it towards actually seeing a production in the fresh. We looked at each other. Great idea! What with the magic of the Internet at our fingertips within a few minutes we'd secured tickets to that evening's show - a well regard production of Puccini's Turandot. Yay!

Later that afternoon we smartened up as best we could (not smart enough judging by some of our co-patrons disapproving looks later mind you) and headed out into the rain in good time before the performance started in order to soak up a bit of the atmos and have a nosey around the old gal herself. Er, The Opera House that is not Turandot.

Sydney Opera House looks great from the outside. I have to say that first and foremost. It's an amazing building. It is slightly, but only slightly, less impressive inside however. Great views of Sydney Harbour and Sydney Harbour Bride of course and lovely red staircases but there are large areas such as downstairs at the back that don't seem to get used despite the similar area upstairs being fair crowded at the intervals. Less impressive still was the auditorium itself. Smaller than I'd imagined it to be and the stage and orchestra pit were tiny. Cast and band alike must trip over themselves in the big performances. I felt really sorry for any director who had lofty ambitions for a storming, expansive production to discover the limited space available here. It looked like the wings were very narrow too and I wasn't surprised to see actors queueing to get off stage later in the show. But I'm quibbling really. If a larger opera house were to get built somewhere else in Sydney with a bigger stage to accommodate bigger productions it would never match THE Sydney Opera House's iconic status.

So to the production itself. Graeme Murphy has directed and choreographed a truly magnificent show. His Turandot is witty, colourful and uses all the space to hand with much aplomb. Oh, if he'd had more space on stage it would have been a joy (ok, enough about the space!) Argo Volmer's conducting was first class and leads Carlo Barricelli and Anke Hoppner were fantastic. Special mention though needs to go to Hyeseoung Kwon whose performance of the slave girl Liu was a show-stopper. The characters Ping, Pong and Pang played by Andrew Moran, David Corcoran and Graeme Macfarlane respectively were also wonderfully portrayed and very funny.

The costumes deserve a very special mention. Kristian Fredrikson's design was simply astonishing. We were wowed in equal measure by the complexity, the panache and the spectacle. Full marks all round.

Stand out tune was of course the opera's third act biggy Nessan Dorma "No one sleeps." And we found it hard to do so ourselves last night after such a great show. If you get a chance, go. 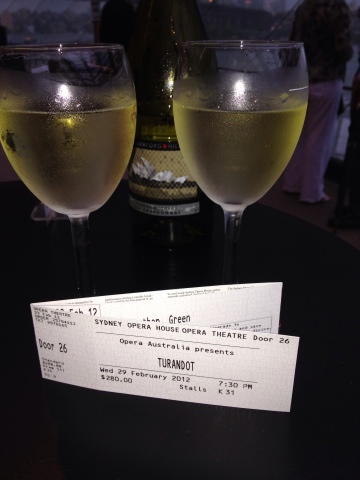 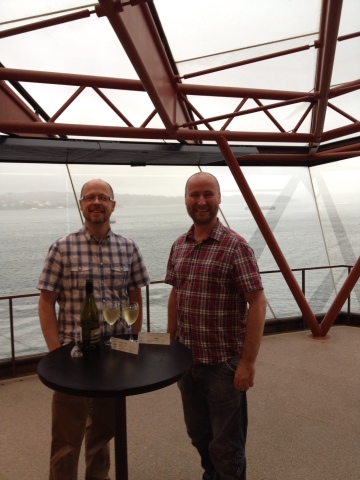 Posted by overyourhead at Thursday, March 01, 2012