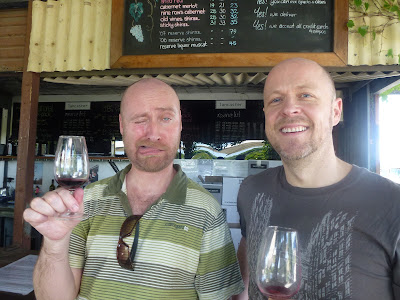 A lot of people in this country pooh-pooh Australian table wines. This is a pity as many fine Australian wines appeal not only to the Australian palate but also to the cognoscenti of Great Britain.

Black Stump Bordeaux is rightly praised as a peppermint flavoured Burgundy, whilst a good Sydney Syrup can rank with any of the world's best sugary wines.

Château Blue, too, has won many prizes; not least for its taste, and its lingering afterburn. Old Smokey 1968 has been compared favourably to a Welsh claret, whilst the Australian Wino Society thoroughly recommends a 1970 Coq du Rod Laver, which, believe me, has a kick on it like a mule: eight bottles of this and you're really finished. At the opening of the Sydney Bridge Club, they were fishing them out of the main sewers every half an hour.

Of the sparkling wines, the most famous is Perth Pink. This is a bottle with a message in, and the message is 'beware'. This is not a wine for drinking, this is a wine for laying down and avoiding.

Another good fighting wine is Melbourne Old-and-Yellow, which is particularly heavy and should be used only for hand-to-hand combat. Quite the reverse is true of Château Chunder, which is an appellation contrôlée, specially grown for those keen on regurgitation; a fine wine which really opens up the sluices at both ends.

Real emetic fans will also go for a Hobart Muddy, and a prize winning Cuivre Reserve Château Bottled Nuit San Wogga Wogga, which has a bouquet like an aborigine's armpit.
Posted by overyourhead at Wednesday, February 29, 2012