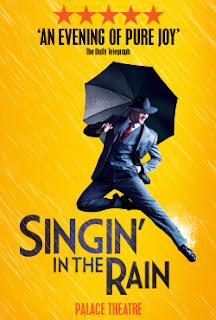 Last night Stu and I went to see Singin' In The Rain at The Palace Theatre in London's glitzy West End.

This West End version is an almost scene for scene conversion to the stage starring Adam Cooper, Daniel Crossley and Scarlett Strallen.

The show is very funny - but no funnier than the film. The singing is really good - but not really outstanding. No, it's the dancing that makes this show excel. The lead performers and ensemble really come into their own with the dance routines. The production is put on with such joy and with such a spring in it's step you can't help but want to jump up and dance yourself. You don't of course because that would be stupid but you have a good time anyway humming the songs, clapping your hands and tapping your feet. Yes, folks it's that sort of unadulterated fun show.

The first four rows got rather wet - but then that what they came for. A big splash. 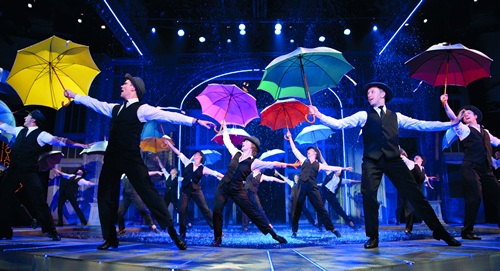 And later after being accused of being a like other people...

Posted by overyourhead at Wednesday, February 08, 2012