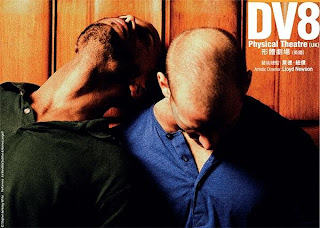 Last night Stu, Darren and I went to see DV8's latest show Can We Talk About This? at the Lyttleton Theatre on London's glitzy South Bank.

The show is a challenging - and some might say (rightly in my opinion) polemic - piece about freedom of speech, multiculturalism and Islamophobia. It's a dance piece that includes a selection of verbatim interview recitals, some audio and video clips and graffiti to tell the story of a dozen or so 'incidents' that have happened between 1985 and 2012. These include the 1989 book burnings of Salman Rushdie’s The Satanic Verses, the murder of filmmaker Theo Van Gogh and the controversy of the ‘Muhammad cartoons’ in 2005.

It occasionally crosses the line from being an earnest advocate of free speech to being a little bit preachy on the negative aspects of Islam in general. And as it dances across that line the dance itself gets a little bit lost on the way.

The crux of this argument is perhaps best reflected in a quote by Kenan Malik, the author of From Fatwa to Jihad: "The liberal fear of giving offence has simply made it easier to take offence."

It's good to be challenged at the theatre sometimes - be made to feel a little uncomfortable. And in that, if nothing else it surely succeeded.